Sunday, 26 Apr 2015, 22:00
Over the weekend, I performed an all-Bach programme in Saarbrücken in Germany with Le Concert Lorrain. The programme included the Easter Oratorio (BWV 249), Concerto for Oboe, Violin, Strings and Basso Continuo (BWV 1060) and the Ascension Oratorio (BWV 11) and it had attracted a large audience to the Stiftskirche St. Arnual in Saarbrücken, Germany for a 5pm performance on Sunday 26th April 2015.
The soloists were Kristen Witmer (Soprano), Ulrike Malotta (Alto), David Munderloh (Tenor) and Peter Kooij (Bass) - and they each gave fantastic aria performances throughout the two cantatas. Kristen Witmer’s performance of V: 'Selee, deine Spezerein’ in the Easter Oratorio was particularly splendid and the flute obligato, played by Leonard Schelb, was brilliant. The choir were excellent throughout, and they even stood for the whole performance, often waiting for a long time between choruses. The first oboe player and soloist in BWV 1060, Susanne Regel, was in excellent form and she played brilliant solos in the Easter Oratorio as well as the concerto.

The church had a high ceiling and a fantastic acoustic. The building (particularly the ceiling) reminded me of the Thomaskirche in Leipzig. The way the orchestra had been laid out was particularly pleasing and it really worked in this space. On the right hand side, on the front row there was (from right to left) the bassoonist, the oboes and the flutes, leading into the first violins. Behind the woodwind (from right to left) there was double bass, organ, cello, violas and 2nd violins. Then the trumpet and timpani section were behind the 1st violins - so everything in the whole ensemble was in pitch order - or if you think about it (from the way Bach laid out his scores) the highest line of Bach’s score (1st trumpet) was the furthest to the left of the ensemble and everything else is in descending order of pitch, the further right you pan. It really worked well and everybody seemed to have enough room and good contact with one another. 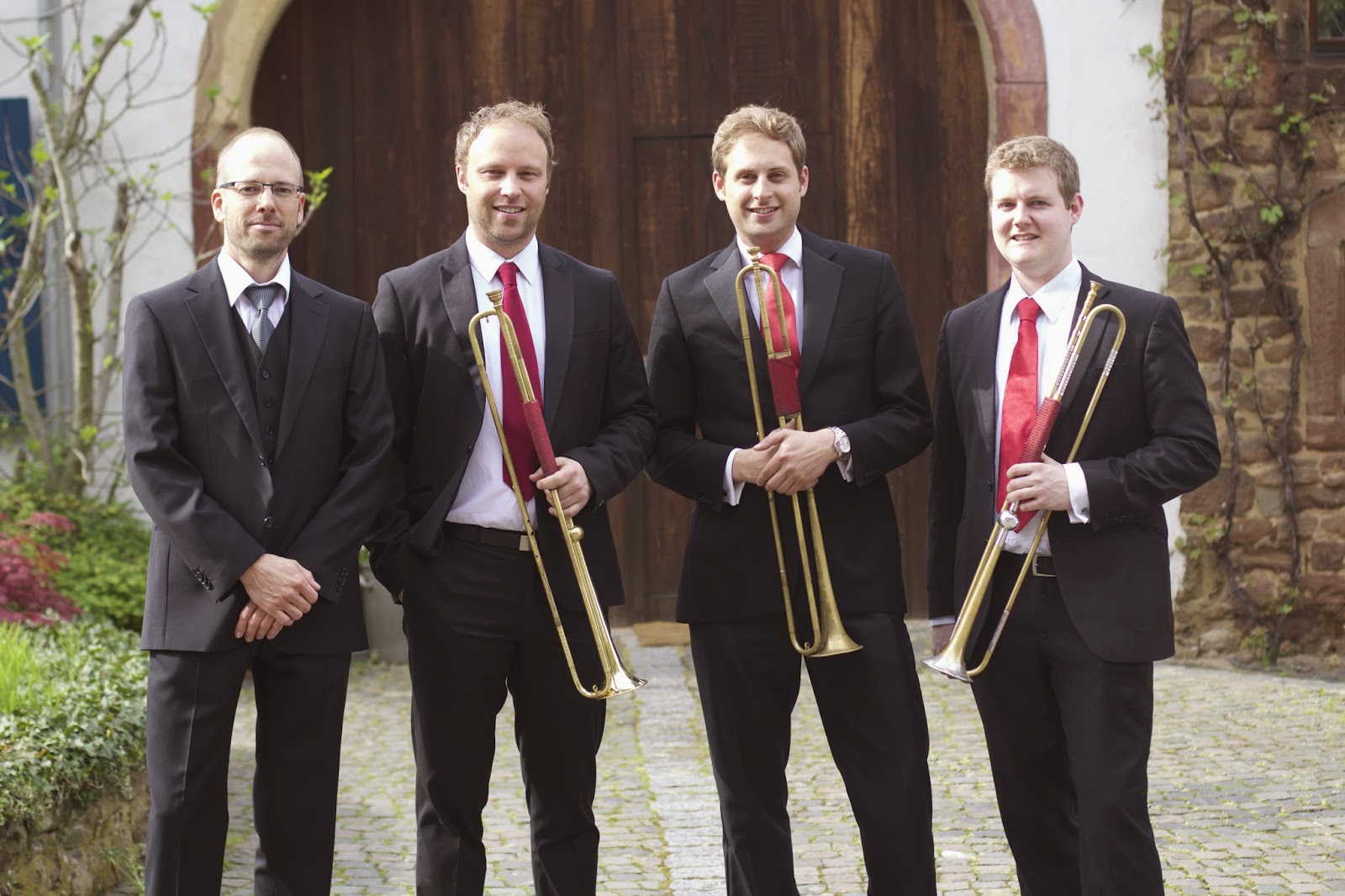 The natural trumpet section consisted of: Russell Gilmour (1st trumpet), William Russell (2nd trumpet), Gareth Hoddinott (3rd trumpet) with timpanist Simon Stierle. It was a fantastic section to work with and we got a huge cheer from the audience and from members of the choir when the conductor gestured towards us at the end of the concert. It was a really pleasing concert, and both BWV 249 and BWV 11 contain some of Bach's most fantastic writing for the natural trumpet (and that's saying something)- they really are a pleasure to play.

Saarbrücken itself was warm and beautiful on the Saturday and it was also a beautiful afternoon on Sunday. It was nice to come and sit in the bright sunlight in the square outside the church in the breaks. We had a free day in Saarbrücken on Monday while we waited for our evening flight home. Sadly it rained all day but it was a nice relaxing day of drinking tea in cafés and socialising with the other trumpet players.

We are indebted to the chairman of the choir who so kindly transported us to and from Luxembourg airport.
Bach, Concert, Germany, Le Concert Lorrain, Natural Trumpet, The Section
Russell Gilmour