Thursday, 10 Sep 2020, 21:00
It is difficult to put into words how it feels to once again, after this long interval, perform live music with an orchestra. I’ve missed the explorative sounds, the thrill of a challenge, the deeply immersive concentration in performance, the organic progression of a project, the collective pursuit of excellence, the feeling of belonging, the extraordinary characters, the excitement, the unexpected twists and turns of freelance life, playing in rooms larger than my dining room, the erudite teachings and nurture of a guru-conductor, the social interaction, having a reason to practise, the minutiae of musical interpretation, harmony, mind-broadening travel, and the intrinsically ephemeral joy of live performance; it punctuates our lives. It’s only now that I truly appreciate how life-enriching and vital that punctuation is.

So it was with great anticipation and happiness that we were able to begin rehearsals with the Aurora Orchestra again. However, before that could happen there were two significant hurdles: the memorisation of Beethoven’s Symphony No.7 in A Major, and a Covid-19 test.

After performing Berlioz’s Symphonie Fantastique last year I wrote that memorising felt like part of the etiquette in the Aurora Orchestra. This year social distancing simply became a new facet of orchestral etiquette. None of us wanted to return to the musical silence of the last six months. We all knew that it was vital to protect others and to ensure the safety of the players and the future of the project. In a nutshell, we had to maintain social distancing, have a swab test, catch condensation from instruments and wear face masks whenever we moved around the room. Incredibly, I didn’t notice any musical issues on account of the more spacious layout. Special thanks must go the orchestra team who had to plan and introduce these measures (and numerous others), to overcome 2020-specific challenges.

Even though I had more time available this year it felt harder to memorise the Beethoven than the Berlioz last year. Back then, I did the bulk of my memorisation work while travelling and I missed that regular but useful downtime this year. Nevertheless, I arrived at the first rehearsal with just a few remaining doubts, or perhaps cautious confidence would be a better way of putting it - which is probably no bad thing on an instrument as immediately audible as the trumpet.

There was a sense of relief in the first rehearsal, not just because we played the symphony through from memory for the first time; a socially-distanced cheer resounded when we received confirmation that none of us had tested positive for the virus. The first rehearsal was full of spine-tingling moments as we experienced such vivid live music for the first time in six months.
The Aurora Orchestra paved the way for a post-lockdown renaissance of live classical music in the United Kingdom, with socially-distanced audiences at several performances. We gave two performances at London’s Coal Drops Yard - an outdoor, covered canopy near Kings Place - on Monday 7th September 2020. These were apparently the first ticketed performances of a full-scale orchestral symphony to be heard by an audience anywhere in the UK since March.


The concert at Saffron Hall on Wednesday 9th September 2020 held the equivalent accolade for an indoor performance. The climactic culmination of the fourth movement received rapturous applause and standing ovations whenever an audience was present, and these performances were reviewed by The Times, The Arts Desk, Ham & High, Robert Hughill and Jon Jacob.
'And how wonderful to see an orchestra not only playing its socks off, but looking elated to be in front of an audience again.' - Richard Morrison - The Times - 9th September 2020 - The Aurora Orchestra, West Handyside Canopy, N1 ★★★★☆
The performance at the BBC Proms on Thursday 10th September 2020 would have no audible or visible audience response, as we played to a remote audience via BBC radio and television broadcasts.

Wonderful to perform again for an audience in a concert hall - thanks so much @saffronhallsw for hosting us last night ahead of tonight’s @bbc_proms broadcast. #backtoconcerthalls #beethoven7 #concert #sociallydistancedconcerts #letthemusicplay


The BBC Proms performance was particularly thrilling and exciting. The Aurora Orchestra seems to achieve the quietest pianissimos of any group that I play with. Throughout the performance I focused on the conductor, Nicholas Collon, who is a visual reassurance, an aide-memoire in the heat of any moment, and an inspiring and technically-superb conductor. Beethoven’s trumpet parts are demanding and I scarcely had time to absorb the surroundings in the Royal Albert Hall so I did not really notice the absent audience until the silence, in lieu of applause, at the end.

For me, the biggest difference was not the lack of an audience, per se, but the fact that the performance could only be experienced via television or radio broadcasts, which provides a slightly different experience to a live concert. However it is inspiring that, even during this pandemic, Sir Henry Wood’s vision to ‘bring the greatest classical music to the widest possible audience’ is still being achieved.


The performance is available on BBC iPlayer and on BBC Sounds, and programme notes are available here.


The Aurora Orchestra’s Prom was apparently one of the few Proms from the original 2020 season that was included verbatim into the reworked BBC Proms 2020 Live series, with no significant personnel changes or programme alterations. 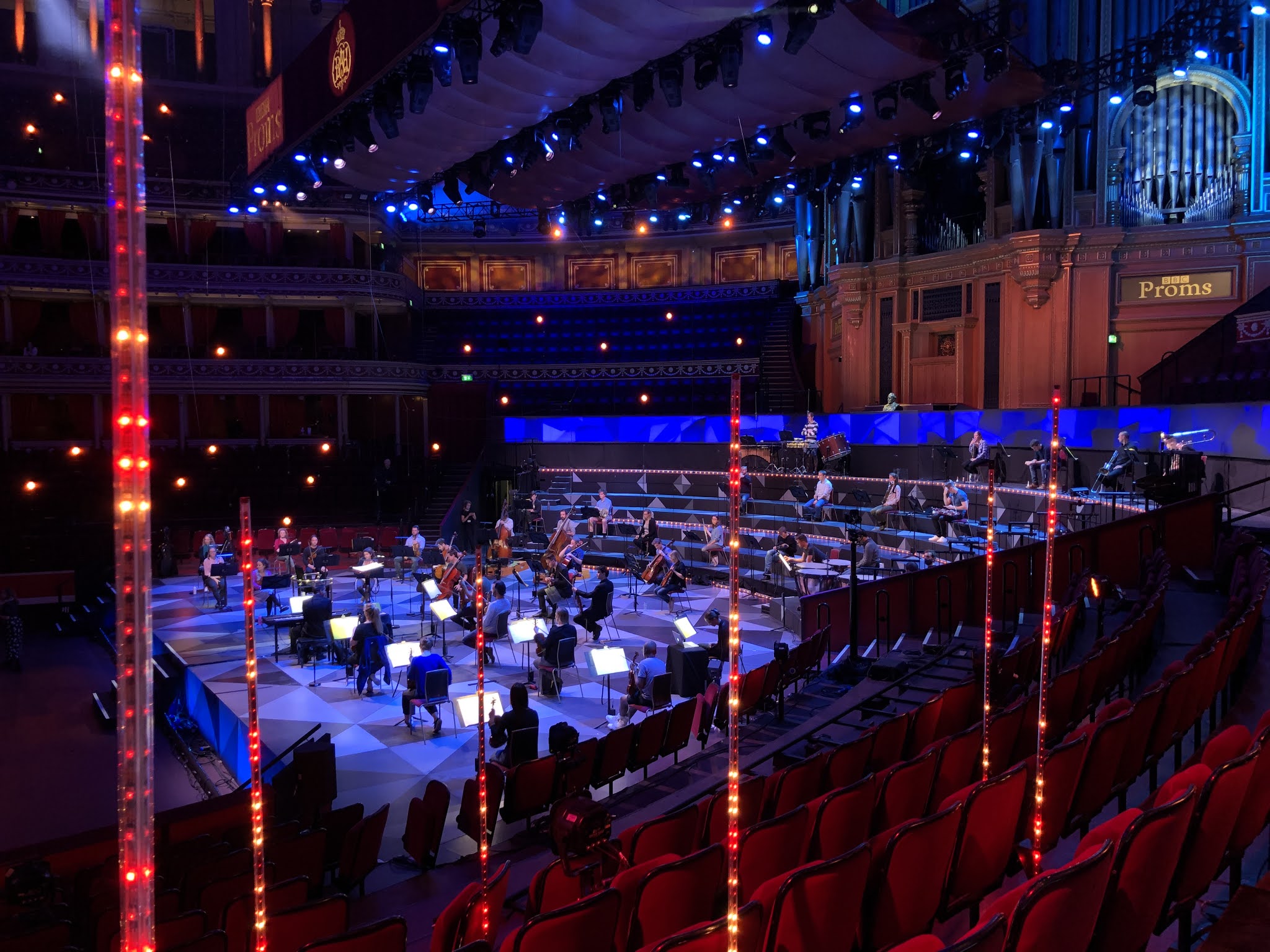 The orchestra performed a new work by the British composer Richard Ayres. No. 52 (Three pieces about Ludwig van Beethoven, dreaming, hearing loss, and saying goodbye) explores Beethoven’s and Ayres’ mutual experience of hearing loss, with innovative use of a gramophone player and some sampled sounds.

5/Thanks to Richard Ayres for his extraordinary and deeply moving new work, by which so many of you were clearly bowled over. Such a privilege to give the piece its premiere and only sad that the pandemic meant Richard couldn't be at the @RoyalAlbertHall person with us.

[The Ayres was:] 'Unbearably poignant, yet also indefatigably stoic. Beethoven would have recognised a kindred spirit.

After that, Aurora played Beethoven’s Seventh Symphony from memory, with exactly the same vitality and vigour as it had in the semi-outdoor performance I reviewed earlier in the week, but this time with the textures crystal-clear. A magnificent achievement.' - Richard Morrison - The Times - 10th September 2020 - Aurora Orchestra/Collon review - startlingly joyous in its unpredictability ★★★★★

The Proms performance also featured a guided tour of the symphony, presented by Nicholas Collon and Tom Service. This spoken explanation, known as the 'Presentation', featured musically-illustrative examples and has become a popular part of the Aurora Orchestra’s format in performances at the BBC Proms.
The trumpet section played natural trumpets in the Beethoven and Matthew Hardy played on historically-appropriate timpani. I played first natural trumpet in the Presentation and in the Beethoven symphony. Another Manx trumpet player, Sam Kinrade, played the first E-flat trumpet part in the Ayres commission and ‘bumped’ me on the natural trumpet in the Beethoven. Imogen Hancock played second trumpet throughout, playing the B-flat trumpet part in the Ayres and the natural trumpet in the Presentation and symphony. It was really great to play in a trumpet and timpani section again.

Just watched an amazing performance by @auroraorchestra and @nicholascollon After all this time away these musicians played like angels - great programme, transcendent performance. Search it out on BBC4. @bbcproms


While the Aurora Orchestra orchestra was playing at Saffron Hall, Jason Evans performed the strongly-featured trumpet part in Dmitri Shostakovich’s Concerto for piano, trumpet and strings (Piano Concerto No. 1) with the Philharmonia Orchestra and the pianist Benjamin Grosvenor at the Royal Albert Hall. In just over 24 hours, three trumpet players from the Isle of Man would perform in two consecutive BBC Proms in the 2020 Live series, which is a remarkable feat for the Isle of Man (population c.85,000).
One day, we might re-watch the video footage from the Proms 2020 Live series, wonder why we were all spaced so far apart, and realise that we have probably played a small morale-boosting role in social history.