Saturday, 13 May 2017, 21:00
I travelled to the wonderful University City of Göttingen in Germany to perform with FestspielOrchester Göttingen (FOG) directed by Laurence Cummings. It was delightful to be back at the Göttingen International Händel Festival having enjoyed performing in the 2014 and 2015 festivals. 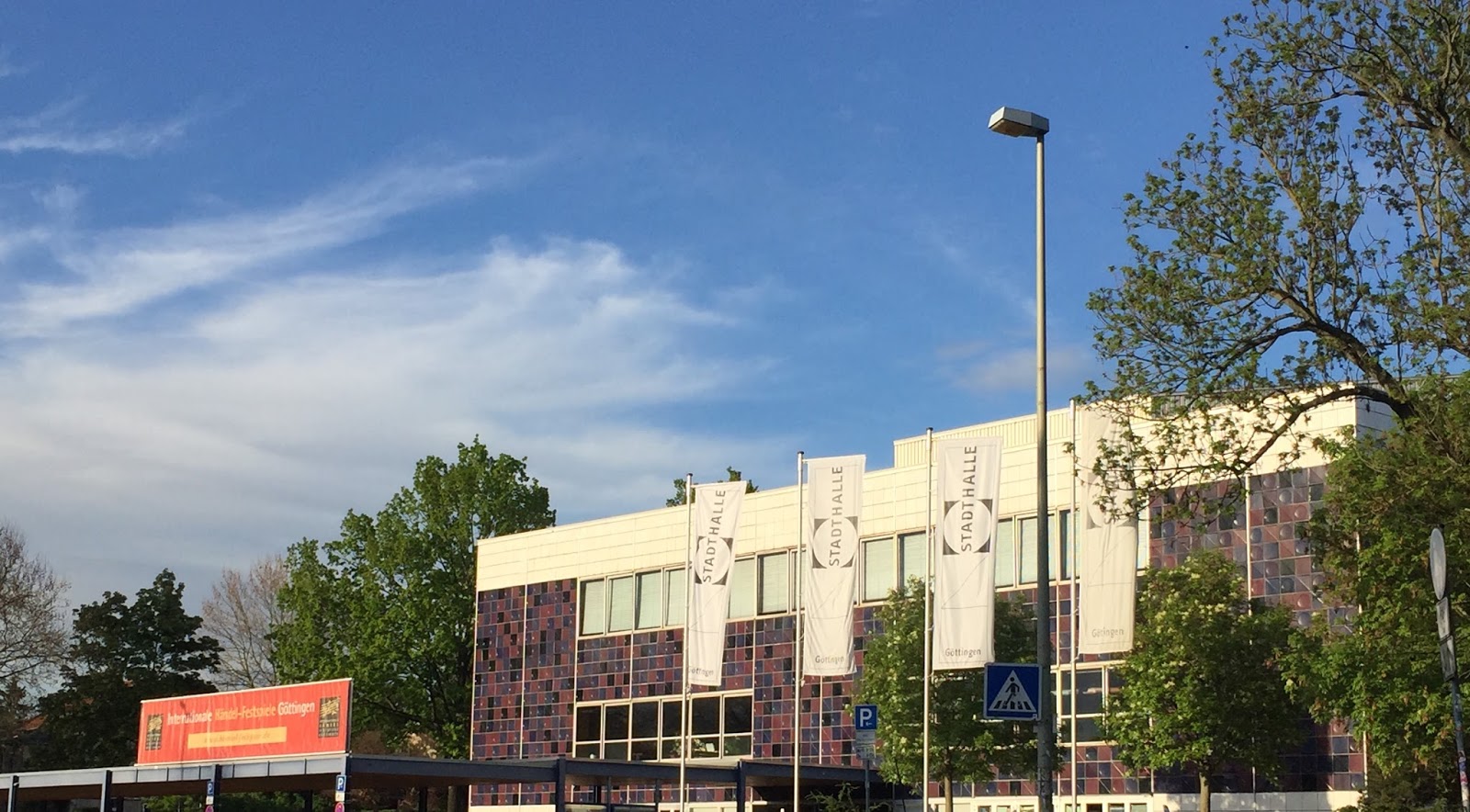 The Galakonzert took place at the Stadthalle on Saturday 13th of May 2017 and it marked the opening of the Göttingen International Händel Festival. It showcased the wonderful soprano soloist Dominique Labelle. The concert began with Georg Phillip Telemann’s Overture Suite in D [TWV55:D17], which featured the natural trumpet playing of David Staff (1st trumpet) and Russell Gilmour (2nd trumpet). We performed from parts edited by our good friend and trumpet player Johann Plietzsch (Edition Walhall). 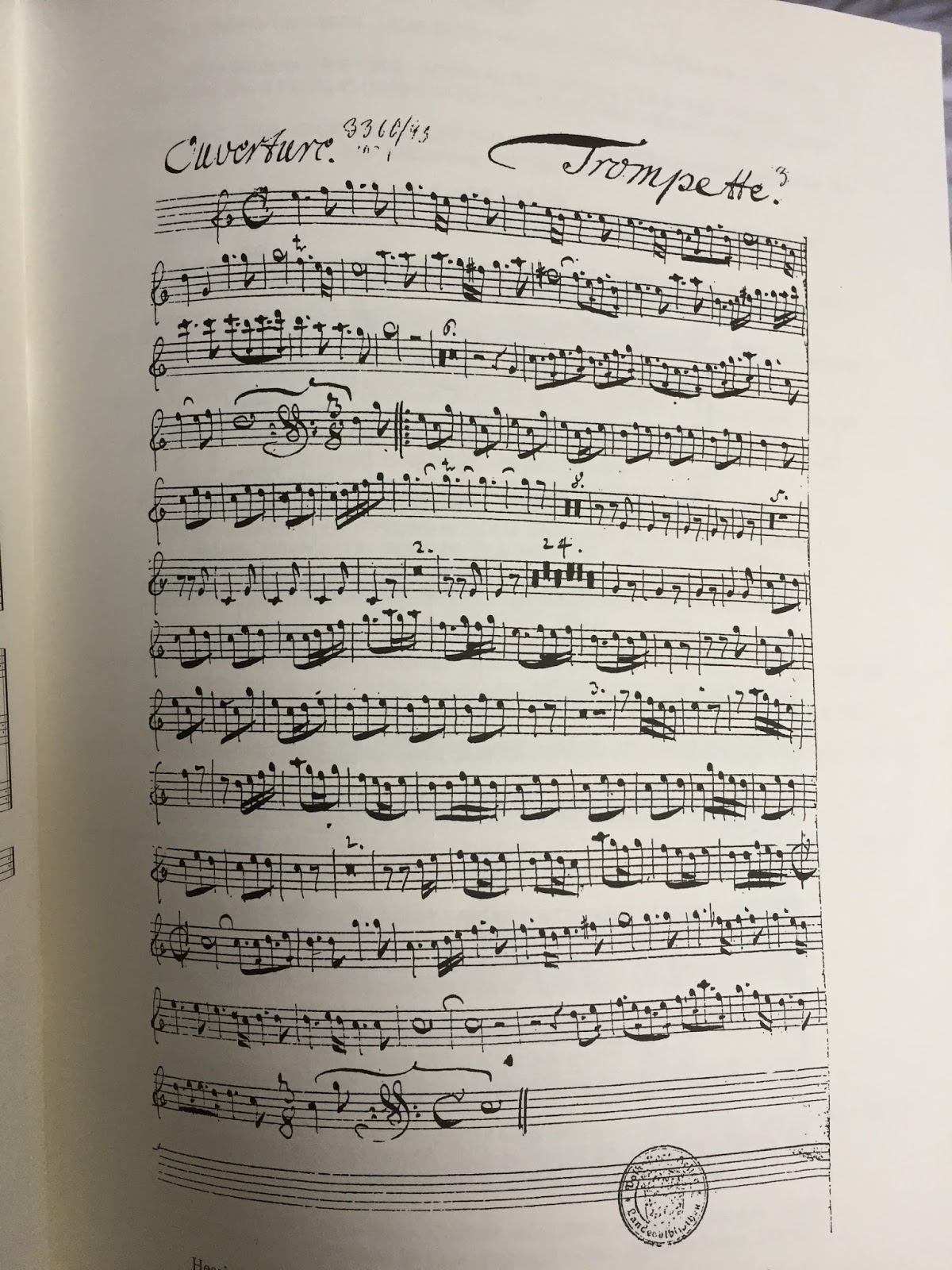 Above: The first trumpet part in Telemann's hand.

"The concert featured a nicely balanced programme of works by Telemann, CPE Bach and Handel. The opening piece, Telemann’s Overture in D major for two trumpets, strings and basso continuo, was a great FOG showcase, displaying their sumptuous sound which is nonetheless transparent in the parts. The marriage of the strings and trumpets (the latter played by David Staff and Russell Gilmour) in the internal ouverture was a delight, as was the energy of the “Les Janissaires” section, the short window with a merrily bubbling bassoon (Rhoda Patrick) and concluding fanfare-ish bourrée." 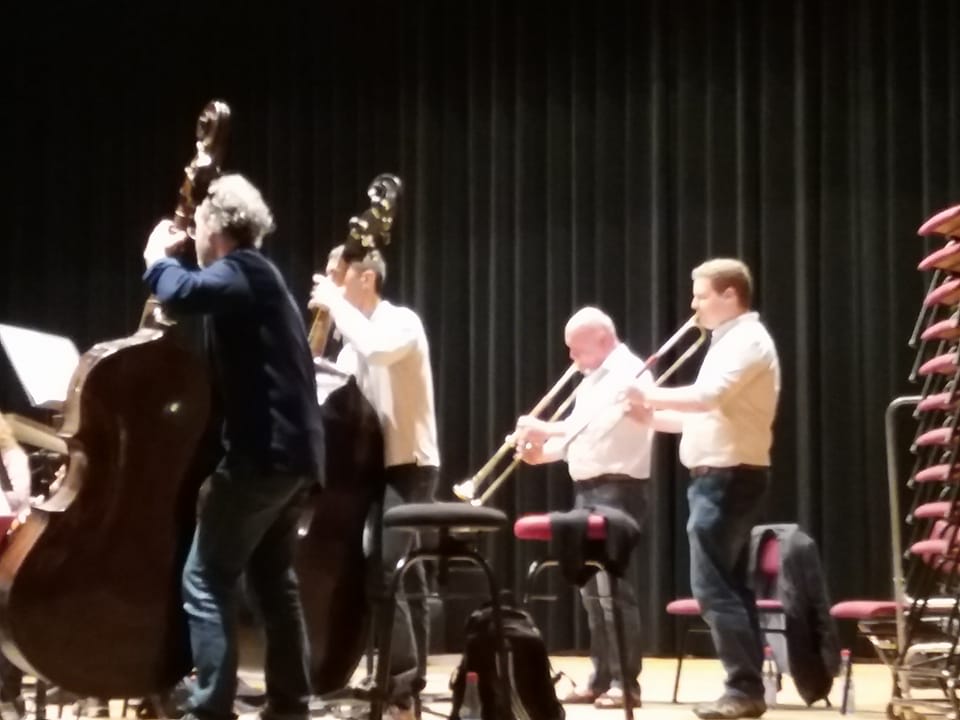 As ever, it was great to play in a section with David Staff and the orchestra was sounding as good as ever. Laurence Cummings has a great manner with the FOG and the interpretation of the repertoire seemed to grow organically throughout the rehearsal process - then it seemed to blossom in the performance. It is liberating to be able to participate in such effortlessly rhetorical music with such skillful colleagues. Laurence Cummings is an excellent leader - he is not unnecessarily prescriptive and he certainly trusts the musicians he leads. To borrow the words of Benjamin Zander (in what has to be one of my favourite TED talks) "[He does] not doubt for one moment the capacity of the people he's leading to realise whatever he's dreaming."

Sadly I was offstage during the rest of the concert, so I missed many of the delights that I had heard during the rehearsal process. I really look forward to hearing the resulting recording. 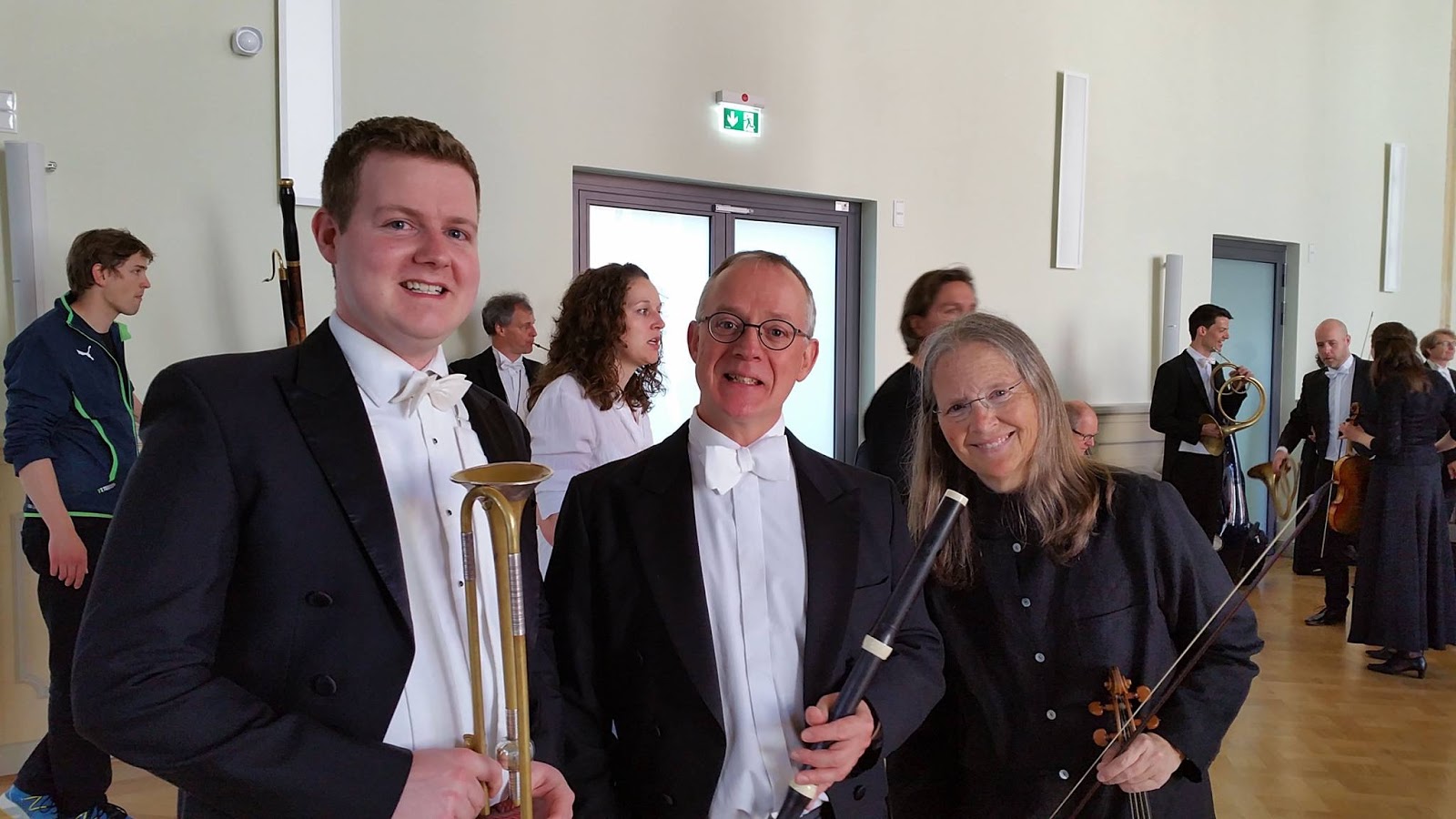 Above, L-R: Russell Gilmour, Brian Berryman and Lisa Weiss. Photograph by David Tayler.
On the day I arrived, the FOG met for an official photograph - which was a great reunion. Göttingen is a place with a real community feel, especially within the FestspielOrchester. David Staff and I were looking for a photographer to take some photos of a natural trumpet that David had just finished making before departing for Göttingen. Since it was such a good example (being both engraved and silver plated) we decided to look for a photographer with a studio who could photograph it before it was posted off to the buyer. We asked Henning, who lives in Göttingen, and he recommended us a friend of his - Anton Säckl - who did an excellent job for us. We thought of the idea at breakfast, asked Henning during the morning rehearsal and had all the photographs on Dropbox by 4pm. That's just the sort of remarkable work that can be achieved during festivals within brilliant artistic communities. The orchestra is marvellous and it's just an incredibly wonderful environment to be in. 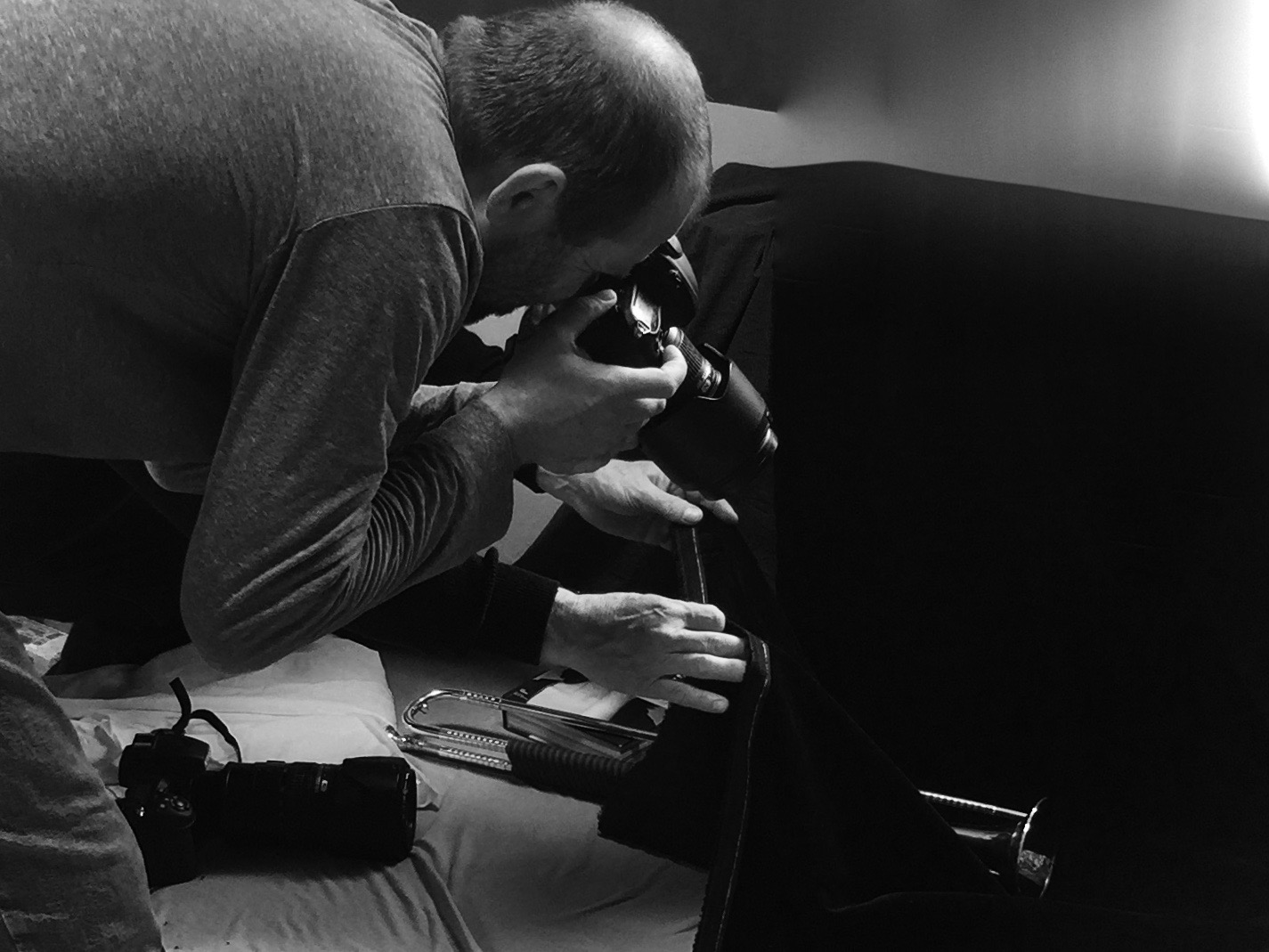 The kitchen at the ParkHotel Ropeter continues to be a centre of FOG's community and we enjoyed many cultural delights, both edible and audible, in there. The FOG folk music sessions were great fun, as ever! 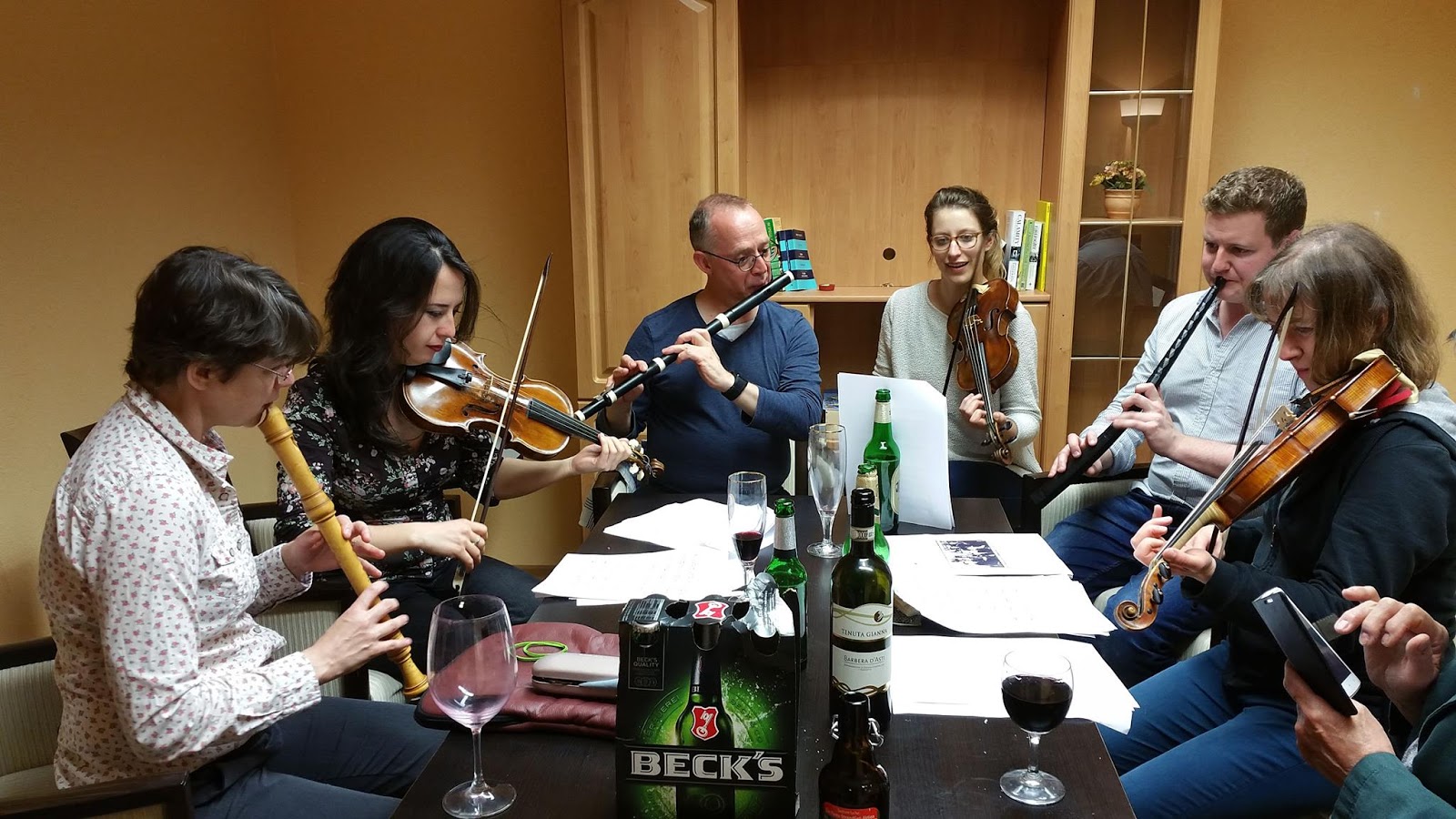 Above, L-R: Hanneke van Proosdij, Alfia Bakieva, Brian Berryman, Anna Lester, Russell Gilmour and Sara DeCorso. Photograph by David Tayler.
Before leaving Göttingen, it was great to meet the trumpet players from the Göttingen Symphony Orchestra. Victor Apostle retired earlier this week, after 38 years of service as principal trumpet with the Göttingen Symphony Orchestra. He had been one of the earliest students of the natural trumpet, studying in Basel in Switzerland along with Jonathan Impett, Paul Plunkett, Graham Nicholson et al.