Sunday, 28 Jun 2015, 19:30
One of my ambitions in life is to be able to play everything Bach wrote for the trumpet and associated instruments. This might sound like a fairly modest ambition - it’s not like I’m attempting to climb Mount Everest, win on centre court at Wimbledon or become a best-selling novelist - but you may be surprised by just how much is involved in this seemingly humble endeavour.

The collected parts included in the Bach for Brass books (Volumes 1-6) contain all of the 'lip-vibrated aerophone’ parts that Bach composed. These books include Bach's cornetto parts as well as the horn parts and all the various types of trumpet parts. I would like to be able to open one of the volumes at random, select a cantata and then be able to play it on the correct instrument.

Bach's music is generally well-known and the trumpet parts are notorious for being fairly difficult. Add to this the fact that I would like to be able to play the trumpet parts both with and without using finger-holes... Well, already, you can imagine that the necessary hours in the practice room are accumulating. I love practicing in this way. However, it is also reassuring to find out whether this learning process is paying off by performing these pieces in public. It is great to have a reason to practice one of these more obscure cantatas to a deadline.

So I was delighted when the opportunity arose to perform a work I didn't know ('Ein ungefärbt Gemüte' BWV 24) along with one I did know ('Jauchzet Gott in Allen Landen' BWV 51) in a 'Bach Vespers' service at St. Mary-at-Hill, a beautiful old church near the Tower of London. Their Director of Music, Martin Knizia had invited me back to perform after a memorable and incredibly enjoyable performance on the 28th of September 2014. The performance in September last year only involved the trumpet in 'Jauchzet Gott in Allen Landen' BWV 51, now Martin was asking me to play in 'Ein ungefärbt Gemüte' BWV 24 as well. 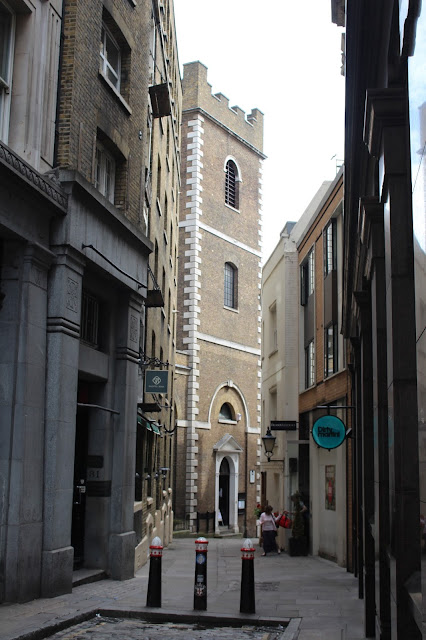 'Ein ungefärbt Gemüte' BWV 24 was first performed on the 20 June 1723 in Leipzig. The independent trumpet part is labelled ‘Clarino’ in the original part, which was written in Kuhnau’s hand. According to Alfred Dürr, this cantata was first performed alongside 'Barmherziges Herze der ewigen Liebe' BWV 185 - which also has a part for a slide trumpet, and likewise ‘Clarino’ is the title in the part in that cantata.

Before agreeing to take part in the concert, I consulted 'Bach for Brass Volume 1' and discovered that this part was written for the single slide trumpet and it also required a horn for the final chorale. I took a look at the slide trumpet part and decided, on account of the sheer virtuosity of the part, that I would need a bit more notice to learn it on the slide trumpet in order to be able to do it justice. The slide trumpet has all the difficulties of the ventless natural trumpet but with the added complication of having the slide, which requires its own technique in addition to an already solid natural trumpet technique. Achieving the two in coordination to play a piece as virtuosic as this would have taken more time than I had - with only a week or so between my invitation and the performance. The added complication was the fact that my slide trumpet was being refurbished at the time and was presumably in pieces in the maker's workshop. I explained this to the Director of Music and I offered the possibility of playing this movement (‘Alles, alles’) on the cornetto instead of the slide trumpet. This seemed like a good solution as the town musicians of Leipzig (stadtpfeifer) were multi-instrumentalists and would have had to show pragmatism at times as well. So, although I was slightly disappointed that I did not have the facility to do it on the slide trumpet this time, I was consoled by the idea that it seemed like a plausible 18th Century-style compromise.

Hypothetically considering this as a cornetto part involved working out the Chorton and Kammerton transposition that would now be necessary, since there is no such thing as a 415Hz cornetto (the wide spread of the finger holes would be unbearable on an instrument of that size). Works that required a cornetto in the 18th Century often had the cornetto pitched a tone higher than the general pitch standard. For the sake of argument, that would mean cornetto in 466Hz and the orchestra playing at 415Hz with the cornetto parts being transposed to fit in. In completing this task for BWV 24, I soon proved to myself that this piece was certainly not a cornetto part (but no one was suggesting that it was). When transposed for the 466Hz cornetto, it would have been in the key of F minor. Not ideal. However, with 490Hz, 466Hz and 440Hz cornetti at my disposal, I decided that I would play it on my straight cornetto in 490Hz in order for it to be in the most user-friendly key. This worked well.

After the rehearsal and before the performance, Martin Knizia told me that if he wasn’t looking at me, he could believe that I was playing the trumpet as the sound can be remarkably similar. I would say, there is a way of playing the cornetto that is similar to the way of playing in the ‘clarino’ register - if you have a good idea in your mind of the type of sound you are trying to achieve. I was imagining a combination of the the ‘chirruping’ (as opposed to the bombastic) quality of the natural trumpet, combined with the ‘shine’ that you can achieve in the higher register of the cornetto. I am inclined to think that ‘clarino' is just the way of playing a lip-vibrated instrument, whichever instrument it may be. I think of it more as a performance direction than any specific indication of instrument type. I would argue that it is possible to play any of these instruments in a ‘clarino’ style. ‘Clarino' means ‘clear’ which I interpret to mean (musically speaking): precise, compact, with a bright sound and without being too loud (i.e clear in the sense of translucent - leaving room to be able to hear the other instruments).

'Ein ungefärbt Gemüte' BWV 24 involved using a horn in the final chorale: 'O Gott, du former Gott’. The chorale appears in the original manuscript directly beneath the ‘clarino’ part, and it is notated in sounding pitch with no additional instrument designation. Alfred Dürr’s tome on ’The Cantatas of J.S.Bach’ states that the part is “designated ‘Clarino’ but best suited to a horn in F” and he references an article by Thomas G. McCracken and another by Kirsten Beißwenger and Uwe Wolf. Similarly, the Bach for Brass volume suggests that it is written for '[Corno] in C+' (the C means that it is notated in sounding pitch and the + means that it has non-harmonic tones) and this might initially lead one to believe that a slide would be required as well.
Click here to see the original 'Clarino' part on the Bach Digital website.
The manuscript part is in Kunhau’s hand. As Bach’s predecessor as kantor of the Thomaskirche in Leipzig, Kuhnau would have been well-aware of the abilities of the 'stadtpfeifer'. The part in this instance is not simply a doubling of the chorale tune, although it does do that as well. The part doubles the vocal line ‘O Gott, du former Gott’, and then there is a short orchestral interjection where this part (let’s assume it is a horn) accompanies the other instrumentalists in the low register of the instrument. The chorale continues to alternate in this way between these two musical functions. All of these low-register passages are in the harmonic series - and the arpeggios are in F major, so this may suggest that the instrument was pitched in F. Indeed, when it is transposed into F the whole chorale (the melody as well as the accompaniment) makes perfect sense within the harmonic series and it is perfectly playable without using a slide. This is precisely what I did, using the horn (a copy of the originals made by Georg Friedrich Steinmez) that I had a small hand in making with Graham Nicholson. With only a few movements between playing the cornetto and the horn, it was quite an extreme instrument change. However, I change instruments a lot when I practice so I didn’t find it too difficult in situ. 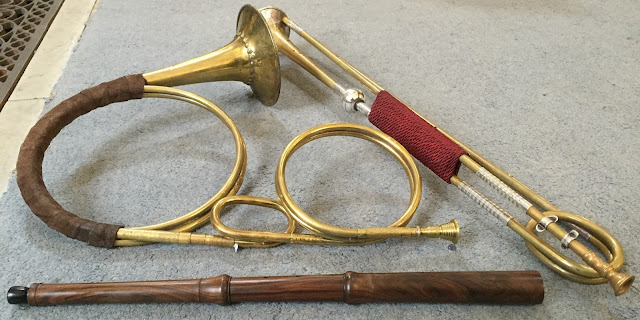 The service began with an orchestral Prelude. This was the ‘Sinfonia’ from Cantata BWV 42 ‘Am Abend amber desselbigen Sabbats’ by Johann Sebastian Bach. This featured beautiful playing from the bassoon and oboes in particular and it was a fantastic way to begin. The Director of Music, Martin Knizia then ascended into the organ loft to play a Chorale Prelude: ‘Herr Jesu Christ, dich zu uns wend’ from ‘Orgelbüchlein', also by J. S. Bach. This segued into the translated hymn ‘Lord Jesus Chris, be present now’. A greeting and responsive Psalm reading followed before the next Chorale Prelude ‘Vater unser im Himmelreich’, (again from Bach’s ‘Orgelbüchlein’) which lead into the translated hymn 'The Lord’s Prayer’. There was then a reading from Romans 8:18-23.

Martin returned from the organ loft to the chamber organ, situated in front of the orchestra and he accompanied five singers (SSATB) in Heinrich Schütz’s ‘Wir gläuben all’ from his 'Kleine geistliche Konzerte’. This was beautiful and it was accompanied only by chamber organ and by Peter McCarthy on the Violone. Verses 2 and 3 had been translated into English and they were sung by the rest of the congregation. Another reading followed before the performance of the Cantata: 'Jauchzet Gott in Allen Landen' BWV 51, featuring myself on the natural trumpet and Emily Atkinson as the soprano soloist. I was pleased with the performance. Everything about it felt good, and it was easy in this generous acoustic and with such good musicians. In addition to this, I was also using a new set of finger holes, which have been scaled down from the B-flat finger holes I helped to develop the concept for - as part of the Gorczycki Volume II recording. 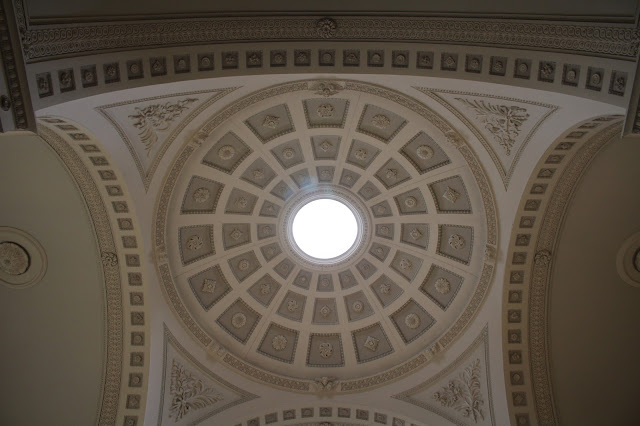 The sermon was given by Reverend Dr. Jonathan Arnold, who was himself a professional musician for many years. I believe he sang with ‘The Sixteen’ among other groups. He was able to talk about the role of sacred music (particularly music by Bach) in the context of religious and non-religious listeners. It was very interesting. Then followed the second Cantata: 'Ein ungefärbt Gemüte' BWV 24, in which I played the cornetto in the third movement and horn in the final movement.

After Prayers and Responses, there was an Offering, for which Martin played Dietrich Buxtehude’s ‘Passacaglia in D’ from the organ loft. The service finished with a Postlude of Bach’s ‘Fugue in C Major’ BWV 547, after which the candles were extinguished and applause followed.

It was fantastic to be involved in another 'Bach Vespers' service at St. Mary-at-Hill and as I said last time: “it felt appropriate to perform Bach in its natural habitat.” It was an excellent orchestra and thank you to all involved in the organisation of the service. This was one of Martin’s final 'Bach Vespers’ before he leaves to take up a new post at a church in Berlin. I wish him well with his new job and I hope that his excellent work at St.Mary-at-Hill will be continued by their next musical incumbent. 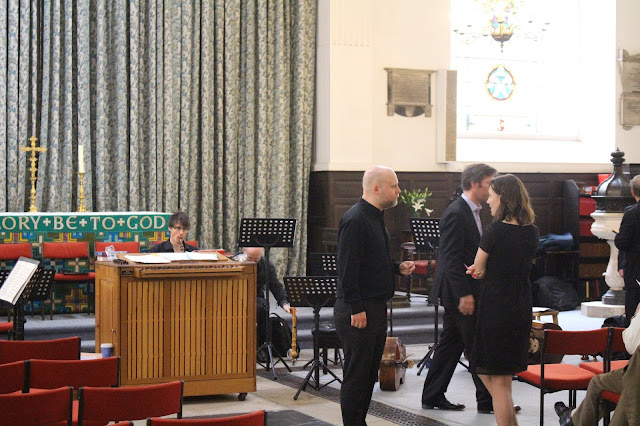