Wednesday, 14 Aug 2019, 22:30
After I played in the BBC Proms for the first time in September 2016 I wrote about the inspiring influence of being allowed to stay up late as a child to watch the Last Night of the Proms - broadcast live from the Royal Albert Hall. Later in life, as a postgraduate student at the Royal College of Music, the area around the Royal Albert Hall became very familiar. On occasion, I would have morning rehearsals and evening concerts with enough time between them to visit the Natural History Museum, the Science Museum, the Victoria & Albert Museum or Hyde Park. I realise that Albertopolis (the area around Exhibition Road and Prince Consort Road, named after the visionary husband of Queen Victoria - Prince Albert) has had a great influence throughout my life.

It seemed appropriate that my second BBC Proms appearance at the Royal Albert Hall on Wednesday 14th August 2019 would take place late at night, and I would have enough time in the day between the rehearsal and the performance to explore some more of Queen Victoria and Prince Albert’s cultural legacy. I was really pleased that my wife had come to London and my mum had flown over specially from the Isle of Man to see me play in the Prom; with so much time between the rehearsal and the performance we decided to visit the State Rooms at Buckingham Palace, which we thoroughly enjoyed. We even saw Queen Victoria’s Erard Piano just a few days before Stephen Hough played Mendelssohn’s Piano Concerto No.1 on it, with the Orchestra of the Age of Enlightenment, on Friday 16th August 2019 for Prom 40.

I had taken great pleasure in playing Rossini’s Semiramide in Prom 68 with the Orchestra of the Age of Enlightenment in September 2016. It was on an enormous scale with a huge orchestra, a large chorus and I played in a sizeable 'banda', a military band which played on the risers at the back of the stage in the first half and from the highest gallery of the Royal Albert Hall for one entry in the second half. I had a very different role in Prom 38 in 2019: I played in a small ensemble of just 25 musicians, I played on stage throughout, I had a lot to play, and the programme featured some of the most virtuosic and complex music ever composed for the natural trumpet.

Lucky to see both @bbcproms last night - fascinating, personal discovery of Berlioz from @the_halle et al with a whole host of friends, then fabulous Bach cantatas by @solomonsknot - awesome natural trumpets and some scene stealing bassoon too. Thank you!
— Richard Knights (@R_Knights10) August 15, 2019

Solomon’s Knot began their Proms debut with a Proms debut; Es erhub sich ein Streit [BWV 19] had never before been performed at the Proms. Likewise, Herr Gott, dich loben alle wir [BWV 130] was another Proms first, and our performance of Man singet mit Freuden vom Sieg [BWV 149] was the first complete performance at the Proms. It was only Nun ist das Heil und die Kraft [BWV 50] that had been performed at the Proms before. This succinct and liturgically linked cantata encapsulated the earlier three cantatas and made for a fantastic finale - it felt like a built-in encore.

An unforgettable night in the @royalalberthall. The Angels prevailed over the Dragons and all was well with the world. Thank you so much @bbc_proms! #promsdebut #bach #cantatas
A post shared by Solomon's Knot (@solomonsknot) on Aug 14, 2019 at 11:40pm PDT


Solomon’s Knot performed without a conductor and the singers (as well as the exceptional obbligato bassoonist, Inga Maria Klaucke) performed flawlessly from memory; an incredible feat given this intricate repertoire. These have become Solomon’s Knot’s hallmarks, promoting direct communication with the audience and a chamber music feel. Eva Caballero played a fantastic obbligato flute feature in Laß, o Fürst der Cherubinen with Thomas Herford (tenor) in BWV 130 and James Toll led the string section in the lilting fourth movement of BWV 149 (Gottes Engel weichen nie) which was perfectly rendered by Zoë Brookshaw (soprano). James Toll also led the orchestra with flair and clear direction - he has an amazing memory to recall an exact tempo and I always enjoy following his clear leading.
It was also a great pleasure to have such a wonderful trumpet section for this performance, and all of us played on natural trumpets made on the same bell mandrel by consecutive trumpet makers Frank Tomes and David Staff. 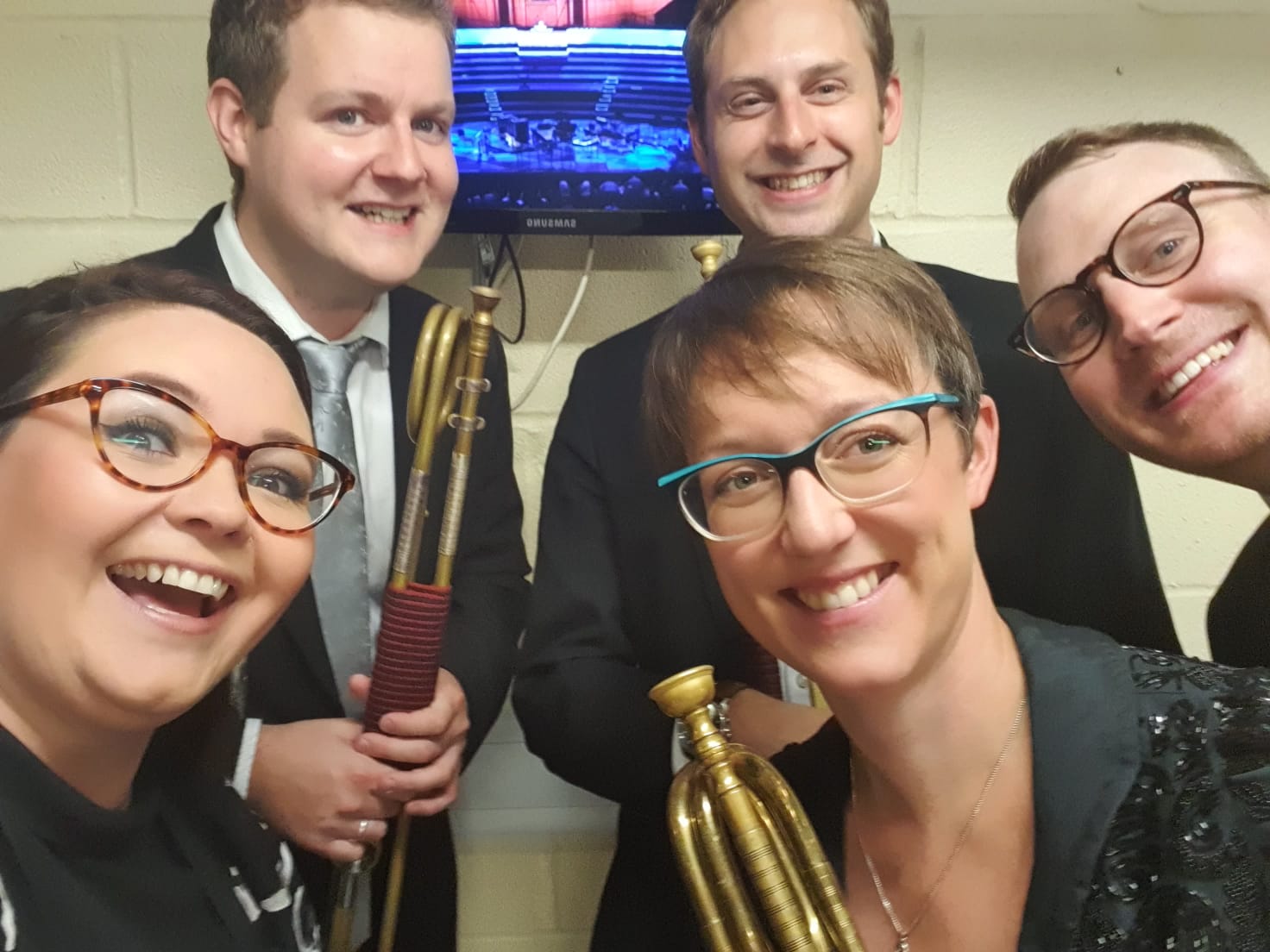 Bumping is a specialised skill in itself and Nick Wright did an excellent job, seamlessly integrating with accuracy and style. I can’t thank him and the other players in the section enough for their incredible dependability, camaraderie and musicianship. David Nice of The Arts Desk described: “a joyous cluster of Bach masterpieces celebrating the heavenly forces' triumph over the infernal serpent… That meant the peerless silvery sound of four authentic trumpets, magical in this venue, in each work…”

"Cantata No. 50 sent us dancing out towards midnight. Sheer joy." - read the full review by @theartsdesk of our Prom debut https://t.co/j8pOnKXQwo pic.twitter.com/xvfJzxg4Qy
— Solomon's Knot (@solomonsknot) August 15, 2019

The cantata Herr Gott, dich loben alle wir [BWV 130] is well known amongst trumpet players as one of the most demanding Bach Cantatas in existence. The first movement is technically very difficult and the second movement offers only fifty seconds to recover before the third movement, which is a Bass aria (Der alte Drache brennt vor Neid) accompanied only by the trumpets, timpani and basso continuo. Jonathan Sells (bass) sang this aria brilliantly and it was a great pleasure to play these wonderful, heroic tunes over Chad Kelly’s inventive and virtuosic harpischord realisation and a fantastic basso continuo section of Inga Maria Klaucke (bassoon), Jonathan Rees (cello) and Jan Zahourek (bass). The aria is simply unrelenting for the trumpets - which is rather appropriate for the text: Weil er nicht Rast noch Ruhe kennet, which means: for he [the ancient dragon] knows neither rest nor respite.

As well as having a section feature in BWV 130, I also had something of a solo feature in BWV 19. Andrew Tortise sang expressively in the tenor aria Bleibt, ihr Engel, bleibt bei mir. He was sensitively accompanied by the strings and oboes with an undulating siciliano rhythm, over which I played the interspersed cantus firmus - Ach Herr, lass dein lieb Engelein - recognisable as the final chorale from the St John Passion.

The trumpets and timpani played in all of the final chorales in these cantatas. The chorales at the end of BWV 19 (Laß dein Engel mit mir fahren) and BWV 130 (Darum wir billig loben dich) involved us much more than the final chorale of BWV 149 (Ach Herr, laß dein lieb Engelein), which the singers began a cappella, and instruments were gradually added towards the end of the chorale, culminating with a short final flourish from the trumpets and timpani.

The acoustic wasn’t always easy to work with but nevertheless it was a huge thrill to perform in the Royal Albert Hall with this incredible ensemble. The concert was broadcast live on BBC Radio 3 and it is available online for the next 30 days. 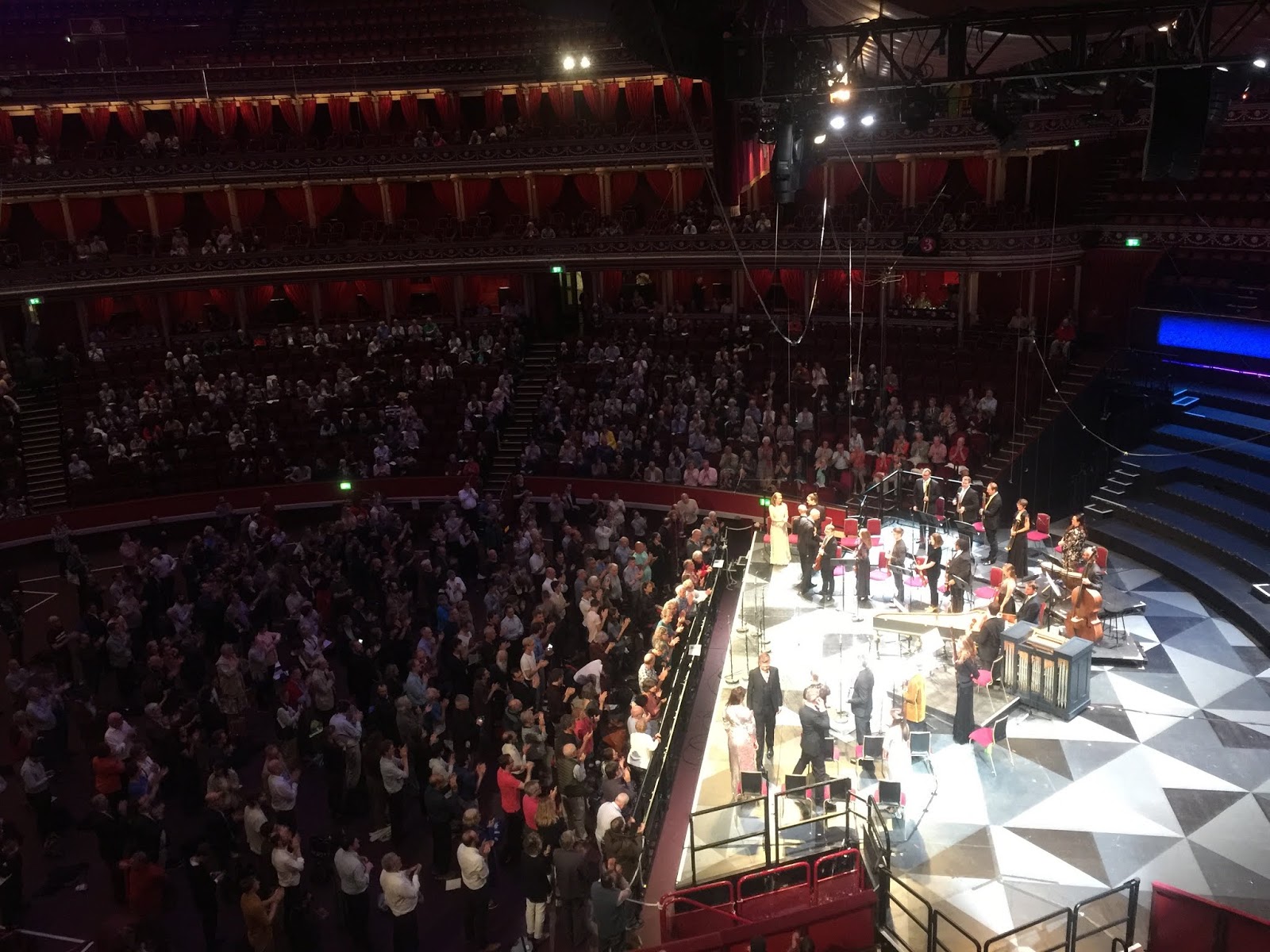 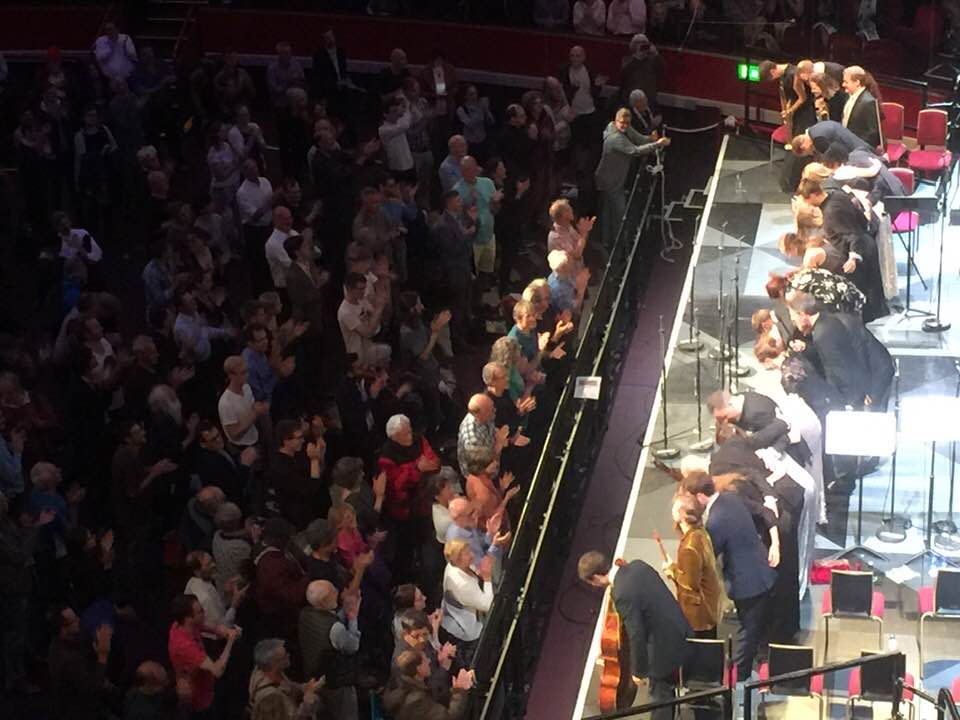 Listening to the vocalists of Solomon’s Knot singing flawlessly memorised music reminded me that I have my own memory homework to be getting on with - the first natural trumpet part of Berlioz’s Symphonie Fantastique - for my next Proms performances with the Aurora Orchestra (Proms 72 & 73) on Thursday 12th September 2019.
Bach, BBC Proms, Broadcast, Festival, London, Natural Trumpet, Radio Broadcast, Solomon's Knot, The Section
Russell Gilmour