Tuesday, 18 Jun 2019, 21:00
‘Snape Maltings, Snape Maltings, Thank Benjamin Britten for Snape Maltings’ was the specially-written encore of Vox Luminis’ King Arthur performance at Snape Maltings in 2017. That memorable performance, exactly two years ago, was my first appearance with the group and there have been many exceptional projects in the interim, including performances at Versailles, the Utrecht Early Music Festival, the Ambronay Festival, Ribeauvillé, Uzès and Antwerp.

Vox Luminis returned to Snape Maltings for a three-concert residency as part of the Aldeburgh Festival in June 2019. 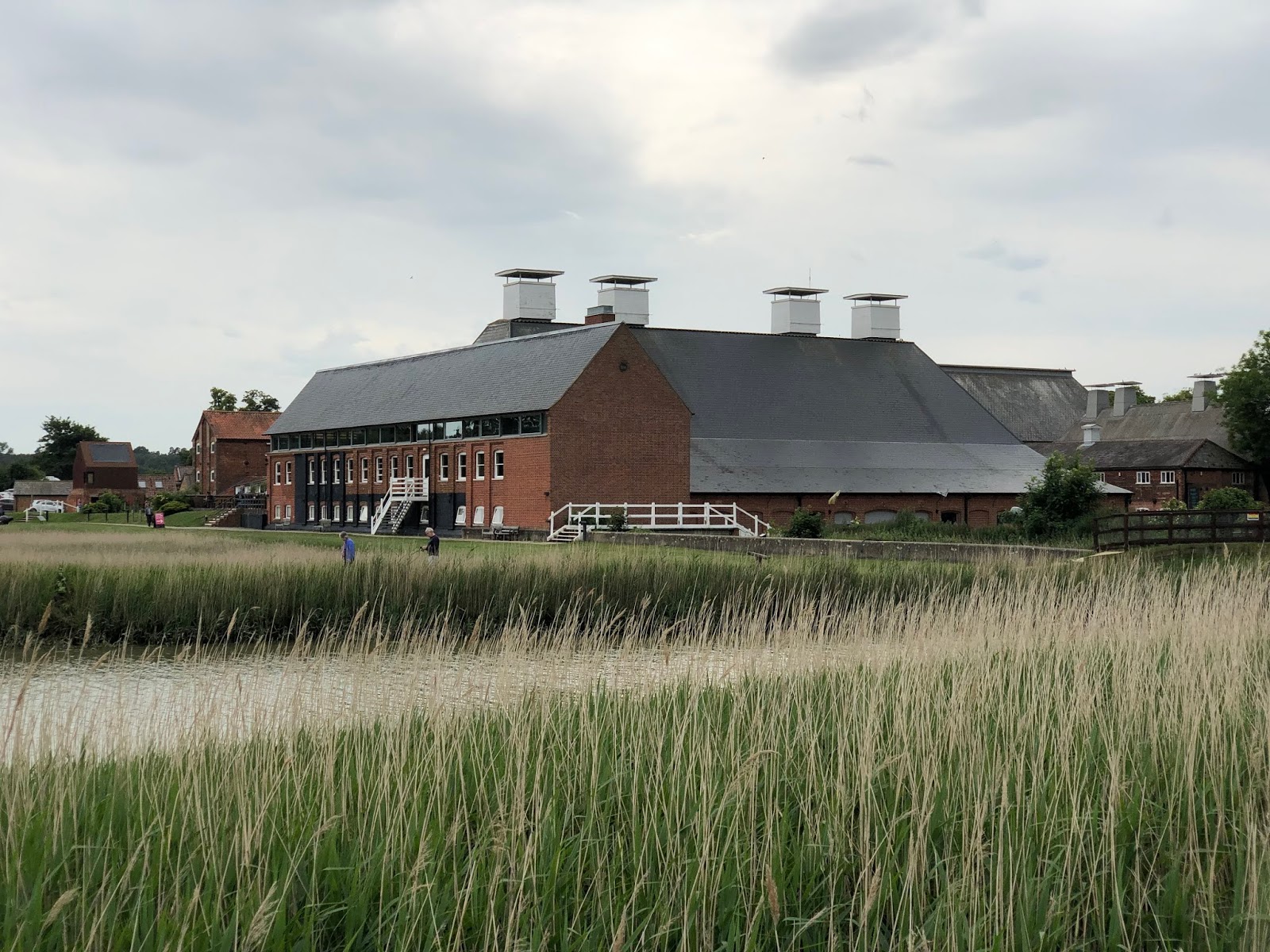 The first performance featured the choir’s Bach Dynasty programme of motets by Bach and his ancestors. The second performance on Sunday 16 June 2019 ingeniously featured Britten’s Hymn to St Cecilia as well as Handel’s Dixit Dominus [HWV 232] and Handel’s Ode for St. Cecelia [HWV 76]. The third concert, on Tuesday 18th June 2019, featured music for the coronation (first half) and funeral (second half) of Queen Mary. It included anthems and funeral sentences by Purcell, Blow and Morley.

The St. Cecilia performance was recorded by BBC Radio 3 and will be broadcast on Wednesday 26th June 2019 at 19:30, and will be available for 30 days thereafter on BBC iPlayer. 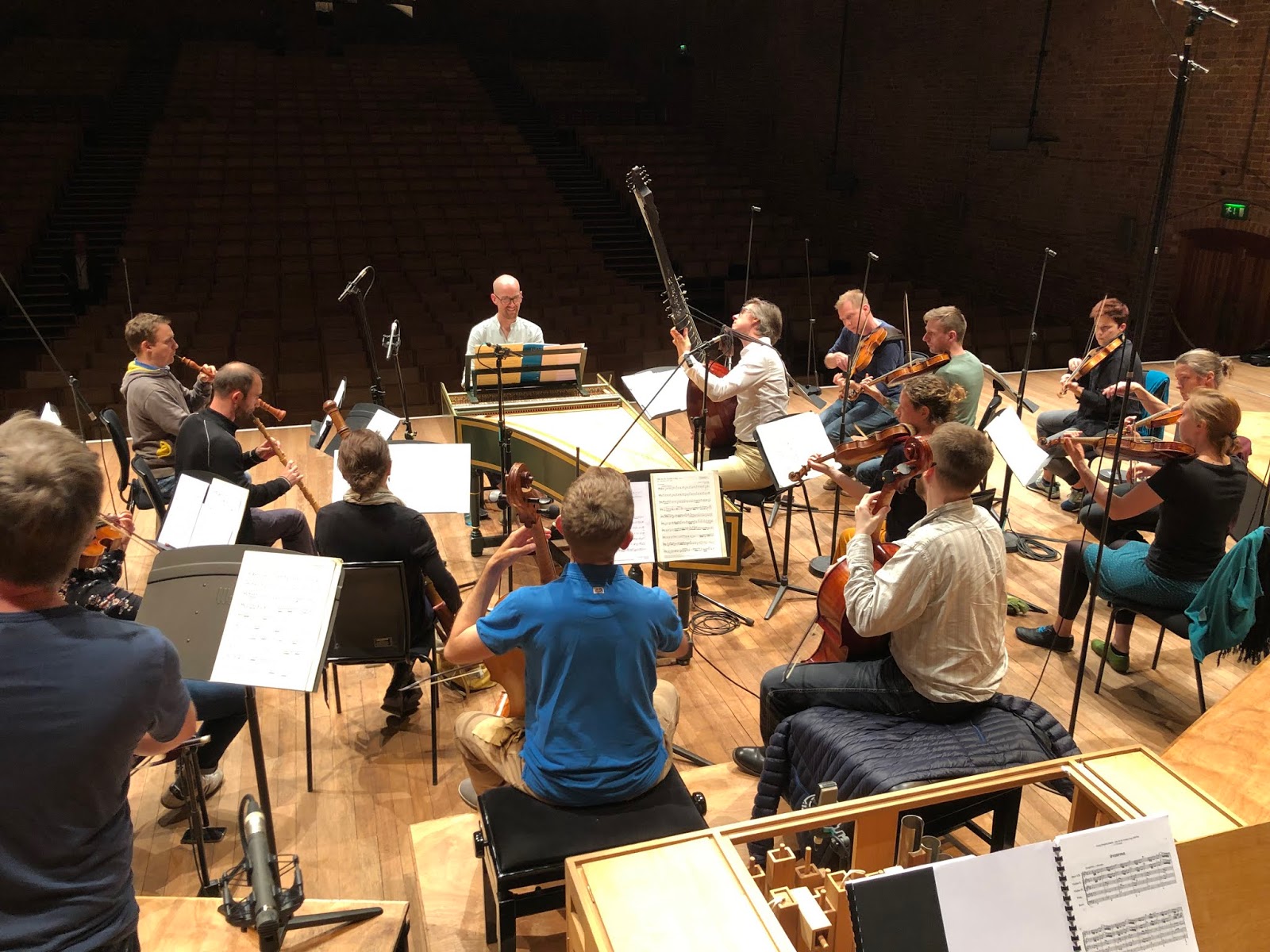 The Ode for St Cecelia featured very fine playing from the outset of the Overture and the strings and oboes sounded excellent under the leadership of Tuomo Suni. Robert Buckland played a fantastic role as the tenor soloist. The choir shone in the chorus From Harmony, from Heav’nly Harmony which came before What Passion Cannot Music Raise, replete with a sublime cello solo from Jonathan Manson and gorgeous singing from the soprano soloist Zsuzsi Tóth - what a combination! Next, I played The Trumpet’s Loud Clangour with the tenor soloist Robert Buckland and the timpanist Tommy Foster and I think the three of us did an excellent job together. The orchestra sounded fantastic in the March and I enjoyed playing the second A and B sections in this joyous number. Next, a complete change of mood came from the duetting flute (Jan Van den Borre) and soprano (Zsuzsi Tóth). Sharp Violins Proclaim was true to its title and the section sounded on top form. But Oh! What Art Can Teach featured the controlled and very fine organ playing of Haru Kitamika and Zsuzsi Tóth simply wowed the audience with her moving singing. Her wonderful contribution continued in Orpheus Could Lead the Savage Race and her melismatic baroque singing was exceptional. Zsuzsi continued with But Bright Cecilia and then she sang the exposed opening of the final chorus - As from the Powers of Sacred Lays which continues, fittingly, with a trumpet solo after the words: The trumpet shall be heard on high. The final chorus 'The dead shall live, the living die and music shall untune the sky' was replete with trumpets and drums and showed the excellence of the entire ensemble. It was truly a staggering performance and it was a joy to be involved. The audience’s reception at the end of the concert was rapturous and there was great applause for all of the soloists - including a rewarding cheer for the trumpet and timpani section! 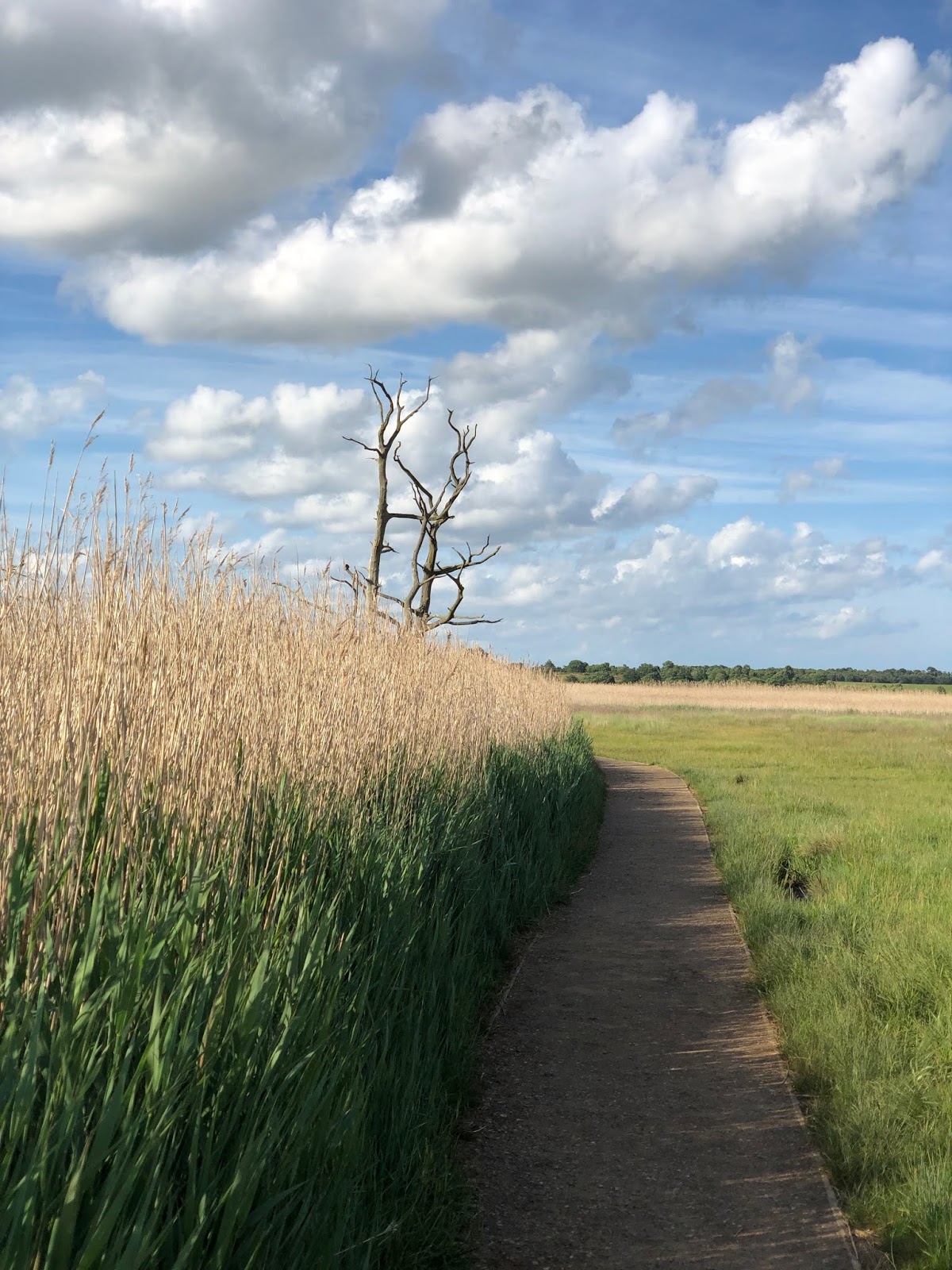 It was also a great way to spend a Sunday. I felt like I had done many of my favourite things that day: walking on the beach in Aldeburgh, fish and chips by the sea, a relatively brief soundcheck-style rehearsal at Snape Maltings and a fair walk along the banks of the River Alde to St. Botolph’s Church in Iken and back to Snape Maltings. Then after an excellent roast dinner I enjoyed participating in a rewarding and very moving performance, before relaxing with some Adnams Southwold Bitter afterwards. It was a great final day of being 30 years old; it would be my 31st birthday the next day (17th June).

I had most of the day off on my birthday so I spent a leisurely morning at the hotel before venturing to Southwold for a bike ride and a birthday lunch by the sea. I switched my natural trumpet for the cornetto and met my colleagues who had just arrived from London and Birmingham to rehearse for the next concert of the residency. Adrian Woodward played second cornetto, with Martyn Sanderson on tenor sackbutt and Guy Morley on bass sackbutt. We had a sectional rehearsal in a conference room in the hotel in Ipswich - after which we ventured out to the Low House (King’s Head) at Laxfield - one of my favourite pubs in the world. It was a very enjoyable day. 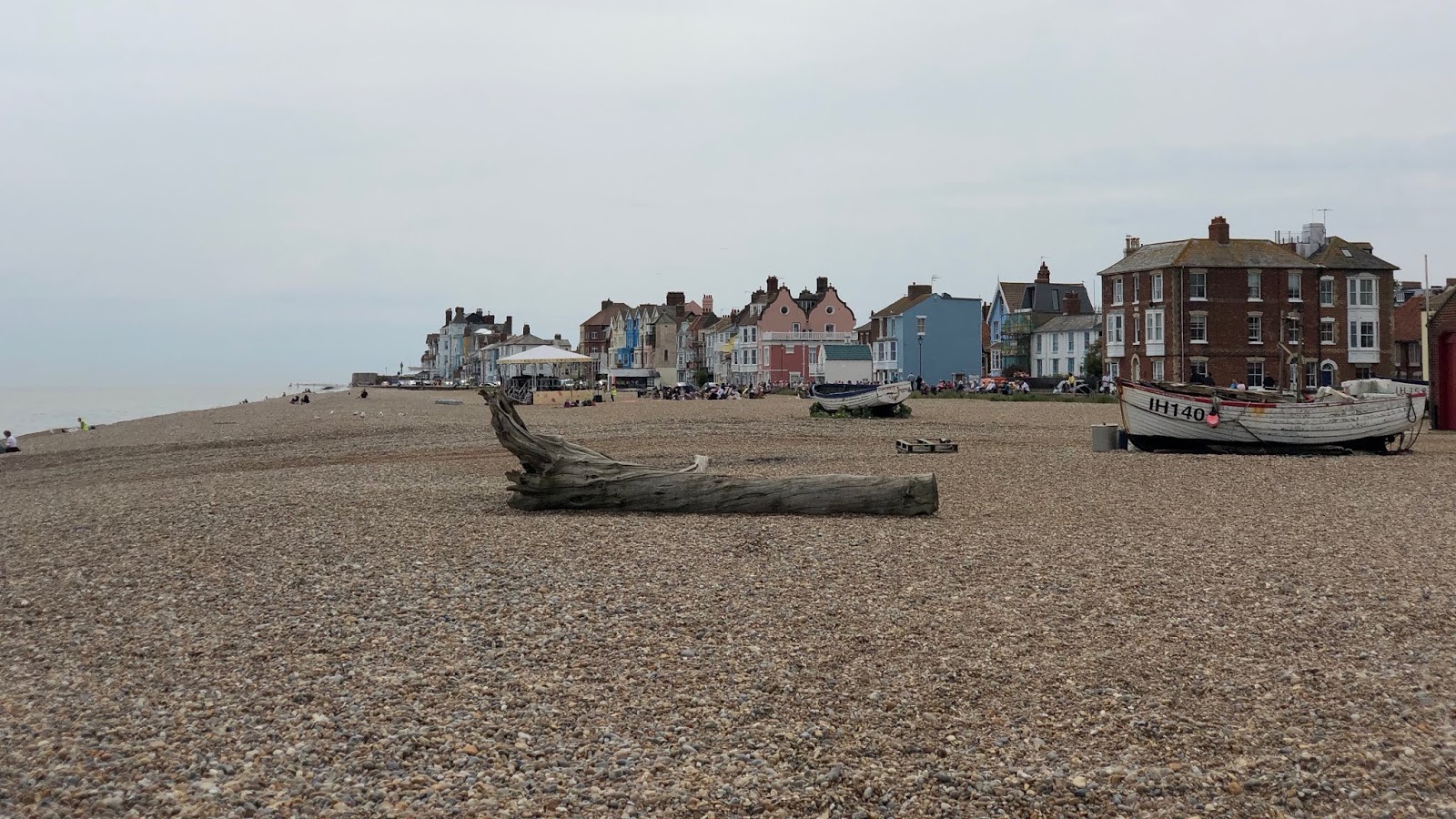 On the performance day, Tuesday 18th June, I had another great day. The brass section met in Aldeburgh at lunchtime and enjoyed a communal picnic after purchasing bread and a selection of different types of smoked fish from one of the shacks on the beachfront. We arrived at Snape Maltings and rehearsed our contribution and practiced the physical movements we would need to make.

Before the bells had been rung for the audience to return after the interval, a band of two oboes (Benoît Laurent & Pedro Castro), a tenor oboe (Nicola Barbagli) and a bassoon (Lisa Goldberg) played music in the oyster bar - upstairs, front of house at Snape Maltings. As their piece concluded, Tommy Foster’s drumming continued and the brass section appeared promptly from the lift to play the March from Purcell’s Funeral Music. As we played from the oyster bar, the oboe band had relocated to play from the entrance hall while people returned to their seats. While the oboes played, we moved and we played from the entrance hall next. While we played, the oboe band moved to an upstairs corridor. Tommy Foster continued drumming and he processed into the concert hall, bringing the remaining audience members with him. He continued playing the side drum - he held this dramatic opening of the second half together. He marched slowly up the interior stairs and was met by the marching oboe band who processed out from the upstairs corridor. He followed them and the brass players processed out behind him, without playing. We paused in the centre of the auditorium on the upper landing, meanwhile the oboes continued playing until they had marched out of the doors on the opposite side. The brass played a rendition from the upper landing while the oboes moved (outside of the hall) to the lower door beside the stage. After we played, we processed behind the drummer and the oboes played and processed in front of the stage (at the audience’s level) and continued playing from offstage until we reached our positions in the centre of the stage, on a small riser. From there, we played a final rendition of the March, facing forward toward the audience. Of course, we had all committed our parts to memory to be able to do this. I was so pleased to be working with such a supportive and professional group of colleagues - an excellent team. The singers began in much the same way, and they sang while walking through the stalls to complete a very interactive and hopefully effective opening to the second half of the concert.

After a few pieces - enough time to recover - the brass doubled the voices in Thou knowest, Lord with the amazing singers of Vox Luminis. After omitting only the Amen on the final cadence we continued immediately with the Canzona from the Funeral Music. The four of us played this highly exposed - beautiful, yet utterly mournful - piece. The singers of Vox Luminis impressed us all by singing the most controlled, quiet and unfaltering rendition of The Third Dirge Anthem: I Heard a Voice from Heaven by Thomas Morley. I have never heard such quiet and controlled singing. I closed my eyes and you could have heard a pin drop in Snape Maltings; all were in deep contemplation.

It is one of my aspirations to perform this piece with all four players playing on flatt trumpets, as it would have been done originally. Cornetts and sackbutts (at 465Hz) were used for this project (after much deliberation) as a compromise as we did not have so much time to rehearse for this project - flatt trumpets are famously quite difficult to play. 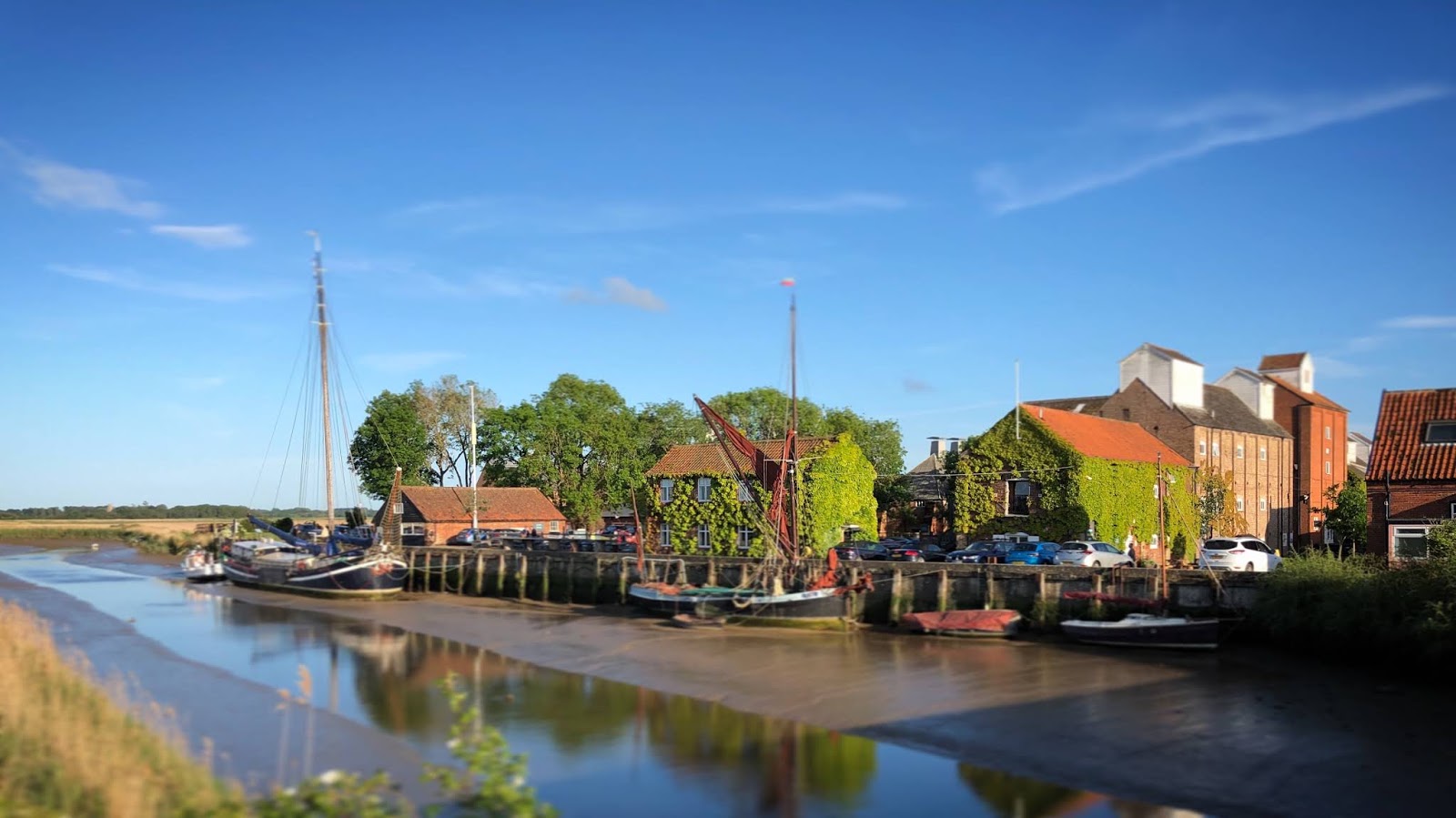 This was another great concert at Snape Maltings and it had been another very satisfying day of music, great food, excellent surroundings and a great walk - on the other side of the River Alde this time.

After my involvement in the Aldeburgh Festival, I visited David Staff at the Lodge (just 9 miles from where we were staying) and I continued my trumpet making apprenticeship with him - I began making a trumpet bell for the first time. Maybe those flatt trumpets aren’t too far away!
Baroque, Brass Instrument Making, Handel, Instrument Making, Natural Trumpet, Purcell, Radio Broadcast, The Section, Vox Luminis
Russell Gilmour