Sunday, 12 Apr 2020, 11:00
While my B-flat trumpet lay dormant in the trumpet cupboard at home, its sound could be heard on BBC Radio 4's Easter Sunday service which aired on Sunday 12th April 2020. The Covid-19 pandemic has prevented any equivalent services from taking place this year. Andrew Earis (Director of Music at St. Martin-in-the-Fields) produced a BBC radio programme which featured some of the music from the 2013 service at St. Martin-in-the-Fields, along with the jubilant sounds of the brass quintet Brandenburg Brass. The quintet featured Jonathan Clarke (trumpet), Russell Gilmour (trumpet), Adrian Uren (horn), Susan White (trombone) and Martin Knowles (tuba).

The description on the BBC Radio 4 website describes the 2020 radio programme in more detail:

'The Archbishop of Canterbury cannot this year give his Easter Message as usual to a packed Canterbury Cathedral. Instead he is speaking to the nation as part of Easter Sunday Worship, which will also include an intimate communion service with his wife from the Archbishop's own kitchen at Lambeth Palace. Easter music sung by massed voices in happier times includes 'Jesus Christ is risen today', and 'This Joyful Eastertide'. 'Thine Be the Glory' was recorded this week by a virtual congregation of the homebound. The Bishop of Dover, the Rt Revd Rose Hudson-Wilkin shares something of what churches in the Diocese of Canterbury are doing to enable prayer and worship while Christians are unable to gather together in church buildings. Readings: Acts 10.34-43; John 20: 1-18. Producer: Andrew Earis.' - https://www.bbc.co.uk/sounds/play/m000h7lg

I only wrote occasional blogs in 2013, and unfortunately I did not write one about that Easter Sunday service, although I remember it well. Back in 2013 I played with Brandenburg Brass at St. Martin-in-the-Fields for a recording on Saturday 30th March 2013 which was broadcast on BBC Radio 2 the following day for the Easter Sunday service. The BBC outside broadcast team had set up a rig microphones and when the red light came on the capacity audience (upstairs and downstairs) fell into a continuous silence. As it was a church service there was no applause; I remember finding that a little odd at the time as I had only ever performed in concerts at St. Martin-in-the-Fields prior to this. Many of the Bible readings were read by Brian Blessed OBE, and never before have I heard words from the Bible read with such artful oration and drama akin to Shakespeare.

When the service finished and the red light went off, and after a collective sigh of relief and a few stifled coughs and splutters were finally released, the master of ceremonies (someone from the BBC, I seem to remember) suggested that we have a round of applause for each performer in the service. The choir and organist got a huge round of applause, so too did our brass quintet, and there were several other honourable mentions. Finally, there was an enormous round of applause for Brian Blessed. The congregation gave the loudest and most sustained applause I have ever heard in St. Martin-in-the-Fields, with cheers. Brian Blessed stood up, outstretched out his arms, took a deep breath, expanded his lungs and bellowed 'THANK YOU EVERYBODY', which could be heard perfectly clearly, even despite the ongoing rapturous applause. It was so loud I can still remember it now - seven years later - maybe it's still ringing in my ears. What a character!

Brian Blessed and I had exchanged a number of glances during our mutual periods of inactivity during the recording. I had my back to the preacher, in the semi-circular brass quintet formation. Brian Blessed and I were directly in each other's line of sight. He seemed to be interested in the brass instruments. There was a moment afterwards when he had a go at playing my trumpet - he's clearly someone with a very capable set of lungs (both for his aforementioned vote of thanks, and for his incredible achievements climbing to an altitude of 8600m on Mount Everest - just 248m below the summit - without supplemental oxygen!). One of the members of the choir captured a photo of this wonderful moment. 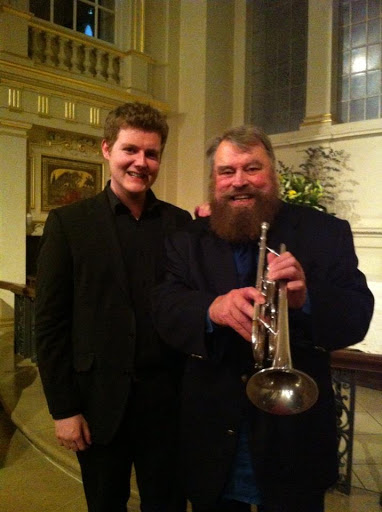 It's great that some of the music from that memorable church service got a second airing on the radio and it is reassuring to think that some of my trumpets, although (metaphorically) gathering dust in the cupboard, might - in some small way - be helping to keep people entertained or optimistic during this pandemic. If you're interested in what else I've been up to during the pandemic lockdown, please read this article.
It is available on BBC iPlayer or on the BBC Sounds app for 28 days: https://www.bbc.co.uk/sounds/play/m000h7lg
Brandenburg Brass features at the beginning, and again at 19m 41s.
Brandenburg Baroque Soloists, Broadcast, Modern Trumpet, St. Martin-in-the-Fields, Trumpet
Russell Gilmour