Monday, 15 Apr 2019, 18:30
I performed with the orchestra Musicians of London and the Goldsmiths Choral Union, under their conductor Brian Wright on Monday 15th April 2019. The ensemble performed Beethoven’s Missa Solemnis [Op. 123] in the Queen Elizabeth Hall at London’s Southbank Centre.

I played first natural trumpet in the section with Nick Wright on second trumpet. Nick had taken on the daunting task of fixing this sizeable orchestra for the occasion. He did an excellent job in finding such a large orchestra during an incredibly busy run up to Easter. There were occasions where Nick required ideas or contacts from my address book and I was pleased to be able to help by suggesting a few players including the leader, the first horn player and some additional violinists.
The project began with an orchestral rehearsal on Sunday 14th April 2019 in a large room at Baden-Powell House on Queens Gate in South Kensington. We rehearsed this intricate piece without the choir and soloists before the first tutti rehearsal on the concert day at the Queen Elizabeth Hall. The first rehearsal was undeniably arduous - it is quite a tiring trumpet part and we rehearsed various sections multiple times. I'm glad we had this rehearsal and I left feeling satisfied and quite fulfilled. Prior to this rehearsal I had formed an idea of the work by listening to an excellent recording by the Orchestra of the Eighteenth Century and Cappella Amsterdam under Daniel Reuss.

I was standing at the stage door of the Queen Elizabeth Hall on the concert day (as Nick and I helped the timpanist get into the building with the timpani) and we saw each of the musicians as they arrived at the hall. Many were just taking off their earphones as they arrived and one humorously remarked ‘I bet you can’t guess what I’m listening to’. It was exciting to play a piece that very few of us had played before. There was definitely an aura of energy that came from the additional concentration that would be required. The choir and soloists did a fantastic job throughout and the piece was obviously much more cohesive and easy to understand with the tutti forces, and under Brian Wright’s leadership. The first half seemed to fly by in record-breaking time.

It was a pleasure for me to finally play at the Queen Elizabeth Hall. It is an excellent acoustic and I enjoyed listening to walls of sound after orchestral block chords that would almost ricochet as the sound channeled forwards and upwards in the auditorium.

I am slightly embarrassed to say that I’ve only ever set foot in the Queen Elizabeth Hall twice before - both of those times were on the front of house side and before the recent renovations (which were completed a year ago). While I was a student at the Royal College of Music, I went to hear the Orchestra of the Age of Enlightenment on 1st November 2011 - they played Schubert’s Symphony No.5, Haydn’s Symphony No.60 and Roger Montgomery played Weber’s Concertino for horn (on the natural horn) - under the direction of Frans Bruggen. Bruggen’s recordings had been (and still are) a huge inspiration and I had not yet met the gentleman himself or seen him direct a live orchestra. The pleasure of meeting Frans Bruggen came a few years later in Warsaw when I first met and heard the Orchestra of the Eighteenth Century. (The other visit to the QEH, in case you were wondering, was on 28th March 2013 with a group of friends from the Royal Northern College of Music. We laughed with the comedian Chris Addison - who thoroughly enjoyed poking fun at a stereotypical Southbank Centre audience member, the type who might find his jokes like an olive oil that was a bit ‘grassy on the palate’! He was very funny and he pitched his humour perfectly!)

Playing Beethoven’s Missa Solemnis trumpet parts required utmost concentration; so many bars look so similar. The piece includes several crook changes and a substantial portion on the low B-flat natural trumpet. I was so pleased that I had excellent equipment for playing in this key [although originally designed to work in B-flat at A=440Hz, it also works very well in B-flat at A=430Hz]. The B-flat equipment had already proved itself invaluable for playing Lully’s Alceste at A=392Hz with Les Talens Lyriques at Versailles and the low-pitch King Arthur with the Gabrieli Consort in Groningen and Hamburg, among other things.

The second half of the concert required even more concentration than the first half as the natural trumpets were now most commonly crooked in B-flat. It is certainly a key to be wary of; this key of natural trumpet has attracted many humourous nicknames over the years, such as the ‘random note generator’ and the ‘catastrophone’! However, I felt like Nick and I did a very good job on those low trumpets that have a rich and beautiful, almost horn-like sound.

One of the absolute highlights of the concert was the violin solo in the Benedictus played by the leader, Michael Gurevich. He played this high tessitura solo with effortless grace and his obbligato was accompanied at times by flutes and then clarinets, an angelic-sounding choir and various other intertwining vocal lines. It is one of the Missa Solemnis’ rare moments of quiet and tender reflection, aided by a thinner instrumentation than much of the rest of the piece. It was absolutely beautiful. 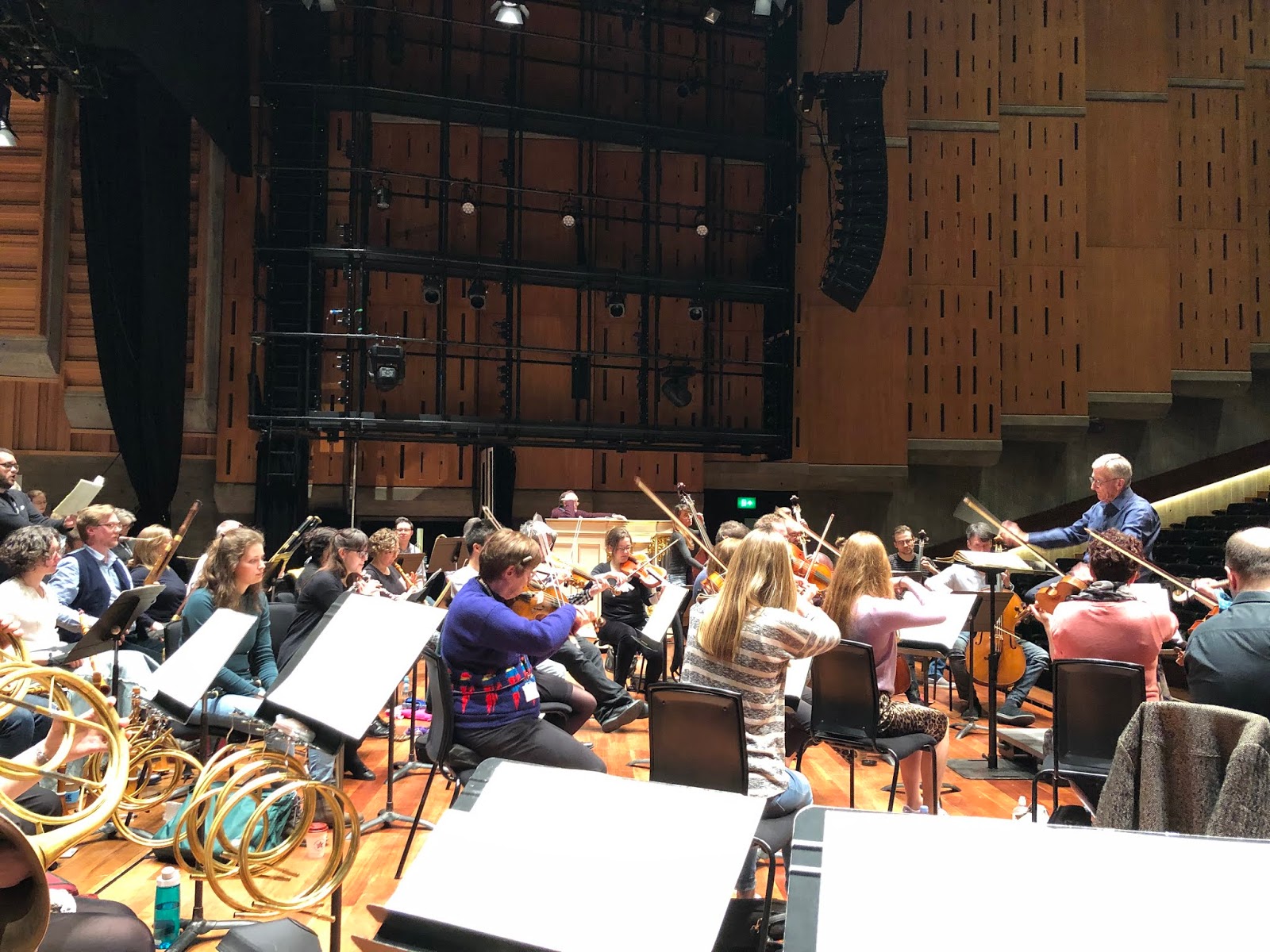 Another honourable mention must go to the horn section of Richard Bayliss, Anna Drysdale, Kate Goldsmith and Alice Kingham. They were exceptionally reliable and they played with ease even when the 1st and 2nd horn were in a different key to 3rd and 4th horn - an impressive skill.

Towards the end of the piece the timpani interjects with a sparse solo and the trumpets join in with an exposed military call to herarld the soprano who sings ‘Agnus Dei, qui tollis peccata mundi’. The trumpet call returns two more times and it is interspersed throughout this exposed and pseudo-recitative section. Nick and I rendered it perfectly in the performance and I’m glad we had enough rehearsal time to cover the geography of this section a few times, just to get familiar with it. Fortunately the orchestral parts we had were very clear - they included the vocal solo lines so we could follow the cues on ossia staves included in our parts, but with so many variables it was definitely worth rehearsing this corner a few times in the final rehearsal.

In the rehearsals, at the very end of the piece, I had found it quite difficult to pitch on the B-flat trumpet because the 3rd and 4th horns were playing near us with a harmonic series in D - which was a little off-putting. In the last few bars of the piece we were playing the tonic (concert D) as the mediant of the B-flat harmonic series while the horns were playing a chord in the home key of D. It was initially quite confusing to have several different harmonic series going on at once, but I eventually listened to the choir instead of the horn section and I found it a lot easier to imagine where the tonic would be in the performance.

It had been a good project and it felt like a great achievement to play this remarkable piece for the first time. I really hope it won’t be the last time I get to play it! Bravo to: April Fredrick (soprano), Susan Legg (mezzo), Peter Harris (tenor), Hugo Herman-Wilson (baritone), Goldsmiths Choral Union, Brian Wright (conductor) and the orchestra Musicians of London for a fantastic concert.

Today it's Missa Solemnis with my friend, mentor and saviour Peter Harris and @goldsmithschoir at Queen Elizabeth Hall @southbankcentre. A solemn and dignified accompaniment in the form of @areejledore's Malik Al Taif - a huge burst of rose and oud. pic.twitter.com/FlRbrGk76j
— Hugo Herman-Wilson (@HugoBaritone) April 15, 2019