Thursday, 19 Dec 2019, 22:00
When I was a student at the Royal College of Music I proposed a series of classes (in 2011) that would be organised and directed by postgraduate students from the Historical Performance department. Since I had proposed the idea, I had the job of arranging the inaugural class and I could choose the repertoire myself. I chose Johann Sebastian Bach’s ‘Christen, ätzet diesen Tag’ [BWV 63], originally written for Christmas Day in 1714 in Weimar and reused in 1723 and 1729 on Christmas Day in Leipzig. This cantata is one of only two cantatas for four trumpets by J. S. Bach, the other is from Leipzig, May 1723: ‘Preise, Jerusalem, den Herrn’ [BWV 119].

I sourced an edition, studied the original manuscripts, transcribed some parts, booked rooms, organised the musicians, invited players from the Royal Academy of Music and the Guildhall School of Music and Drama to play the trumpet parts; and I had the pleasure of directing the ensemble on the day. Though I thoroughly enjoyed directing the class, it has since been an ambition to play these remarkable trumpet parts myself.

So it was with great delight that Le Concert Lorrain, instead of performing Bach’s Weihnachtsoratorium [BWV 248] as we did last year (and as we had when I first played with Le Concert Lorrain in December 2010), programmed a different Christmas programme this year that would feature several Bach cantatas, BWV 63 included. I was delighted that we would be joining forces with the Dresdner Kammerchor again.

The programme would begin with a cantata for the first Sunday of Advent, ‘Nun komm, der Heiden Heiland’ [BWV 62], before: ‘Christen, ätzet diesen Tag’ [BWV 63], ‘Unser Mund sei voll Lachens’ [BWV 110] and Bach’s ‘Magnificat’ [BWV 243], which were all written for Christmas Day.

I played first trumpet and zugtrompete (a natural trumpet with a single telescopic slide). I played the cantus firmus part in the first movement of BWV 62 and the final chorales of BWV 62 and BWV 110 on the zugtrompete. I was fortunate to be able to use Sam Kinrade’s new trumpet made by David Staff, with one of my engravings adorning the garland. This was the first time I had performed in concert on a trumpet that I had engraved. As Sam played fourth trumpet in BWV 63 his trumpet was already set up without holes so it was most practical to use my slide and to borrow his trumpet to use as a slide trumpet. 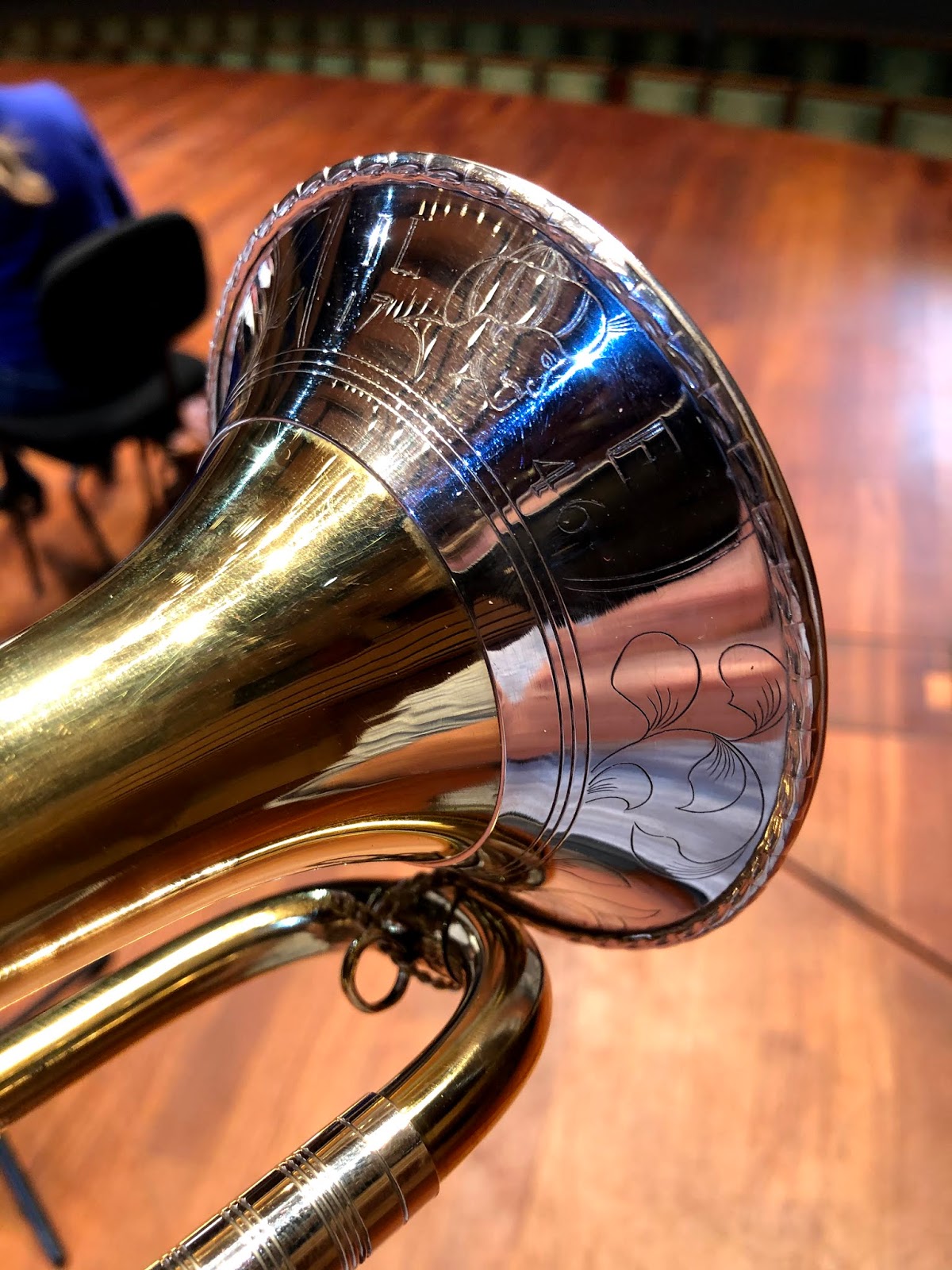 The four of us met at Heathrow Airport early on Tuesday 17th December 2019 for the 07:55 BA flight to Luxembourg. Upon arrival, we were met by a gentleman who drove us to Peltre on the outskirts of Metz in France. We rehearsed and resided in a vast convent - Couvent de Peltre - on Rue Saint-André. Our rooms were large dormitories with multiple beds in each room. My room had 4 beds, Gwyn’s room had 5, Sam’s room had 6 and Gareth’s room had a record 10 beds!

We rehearsed in the afternoon and evening with Marcus Creed, a wonderful director who runs a tight ship in a calm and easy-going manner. I loved playing Bach under his direction.

After breakfast we had a few hours free on Wednesday morning to explore the area around Peltre. There wasn’t much to see in the village itself, so we went for an extended walk in the surrounding countryside. We walked to an old fortress (some kind of large concrete bunker) and came back in a vaguely triangular route through a path in a wooded area. It was good to stretch our legs before lunch and the coach ride to Luxembourg.


Nice walk in the woods this morning in Peltre near Metz.

As we rehearsed in the Luxembourg Philharmonie, we entertained the idea of heading into the city centre after the rehearsal to enjoy the Christmas markets. In previous years this would have been ambitious in the time we had available, but back then we had gone via Fort Niedergrünewald, the valley floor and the Pfaffenthal lift, which took a long time - certainly more than an hour in each direction. This year we were able to cross the Grand Duchess Charlotte Bridge which had previously been closed for refurbishment between 2015 and 2018. We crossed this bridge, complete with new tram tracks and swanky lighting, and this direct route significantly sped up the walk into the city centre, cutting the journey time to about 15 minutes each way. We skipped the soup and sandwiches that had been provided at the Philharmonie, and a wind band played Christmas favourites as we ate bratwurst and gromperekichelscher (potato pancakes) at the atmospheric Christmas Market in the Place d’Armes. It was great to visit the centre of Luxembourg as a trumpet section. 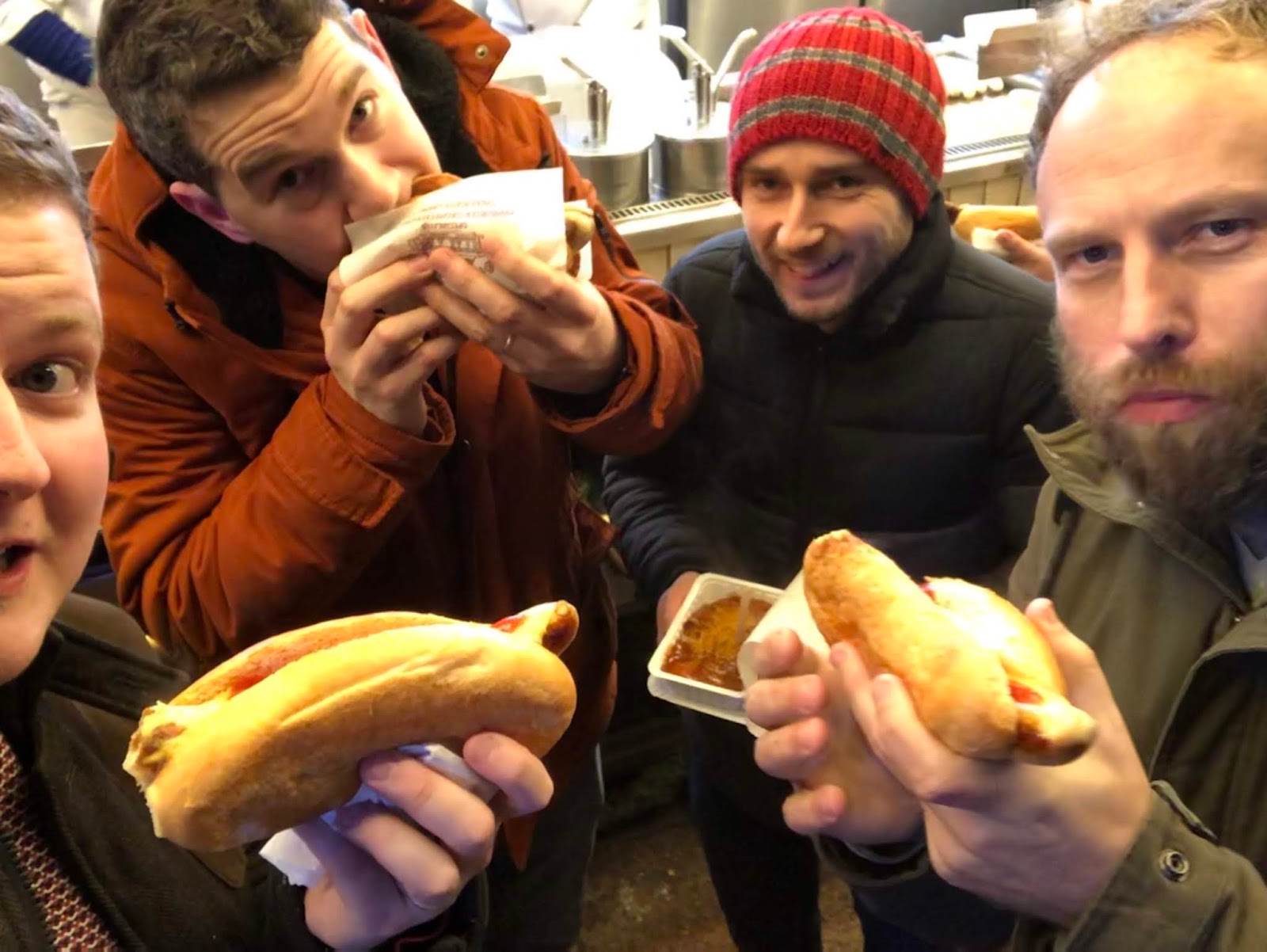 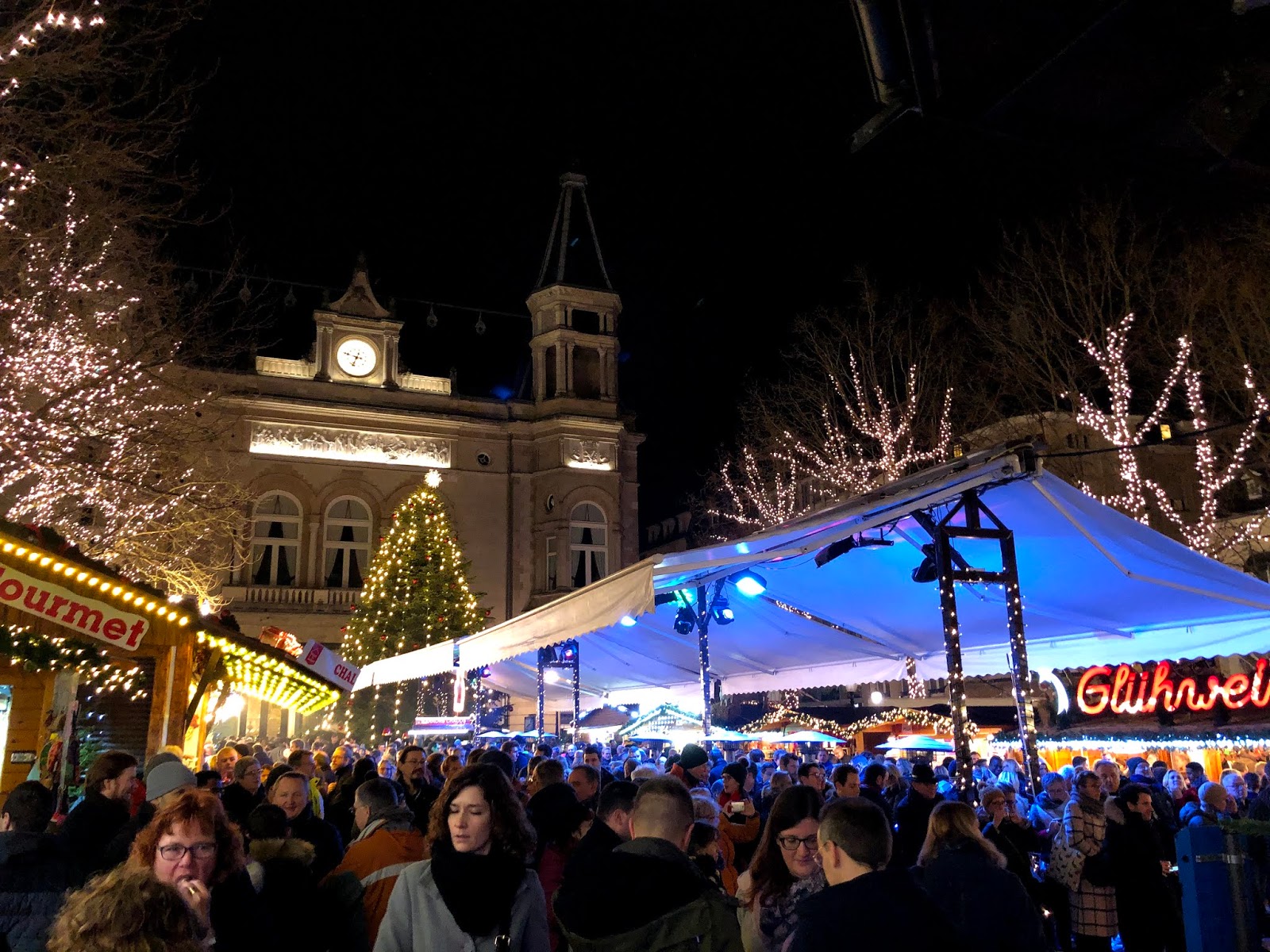 We returned to the Philharmonie and enjoyed a lively performance of this all-Bach programme. It was fantastic to be back playing in this fabulous acoustic. Mary Bevan (soprano) had joined the project at the pre-concert rehearsal in Luxembourg, and she did a great job. It was lovely to see her again after a project we did together earlier this year - Handel’s Saul at the Göttingen Handel Festival. It was also great to play with the oboists Susanne Regel and Kirsten Linde, and the violinist Wolfgang von Kessinger from the Göttingen Handel Festival Orchestra.

Tim Mead (countertenor) sang fantastic solos and duet arias, and he and Guy Cutting (tenor) sang a very memorable duet with a stylish string accompaniment in BWV 63. I had the pleasure of playing an obligato trumpet and bass aria with Tobias Bernd (bass) in BWV 110/6 - ‘Wacht auf, ihr Adern und ihr Glieder’. I thoroughly enjoyed playing this aria, after which Gareth handed me the slide trumpet and took my trumpet, so that I could immediately play the final chorale of BWV 110 ‘Alleluja! Gelobt sei Gott’. After this busy end to the cantata and the applause, we segued into the opening movement of the Magnificat.

The Dresdner Kammerchor sounded incredible, especially in the final chorus of BWV 63, and it was great to work under the direction of Marcus Creed.

After the concert we changed and packed away, and the trumpet players shared a bottle of beer in the dressing room. Unfortunately there had been a problem with the coach and we had to wait for a replacement. The coach eventually arrived and the group split into two groups (as planned) with half staying at Luxembourg airport and the other half returning to the convent. The first group would be flying with Ryanair from Luxembourg (so it was those people not carrying instruments as hand luggage). The other half (trumpets included) arrived back at the convent in Peltre at 01:10am and we had to be back on the bus at 05:15am to make our way to Basel airport for an Easyjet flight. It was a very short night, but I slept remarkably well. Our flight was delayed by an hour or so, but we made it to Budapest in Hungary in just enough time to check in to the hotel and get straight back on the coach to the concert hall.

I had never been to Budapest or Hungary before, and I saw lamentably little of either on this trip. However, we did manage a quick walk up the embankment on the Danube river and we played in the impressive Béla Bartók National Concert at the MüPa (Művészetek Palotája - Palace of Arts), which was internally magnificent. Externally the building was illuminated by flashing built-in strips of light, which twinkled by the riverside. Our performance was filmed by 8 television cameras and the audio was broadcast live on the national radio station: Bartók Radio. 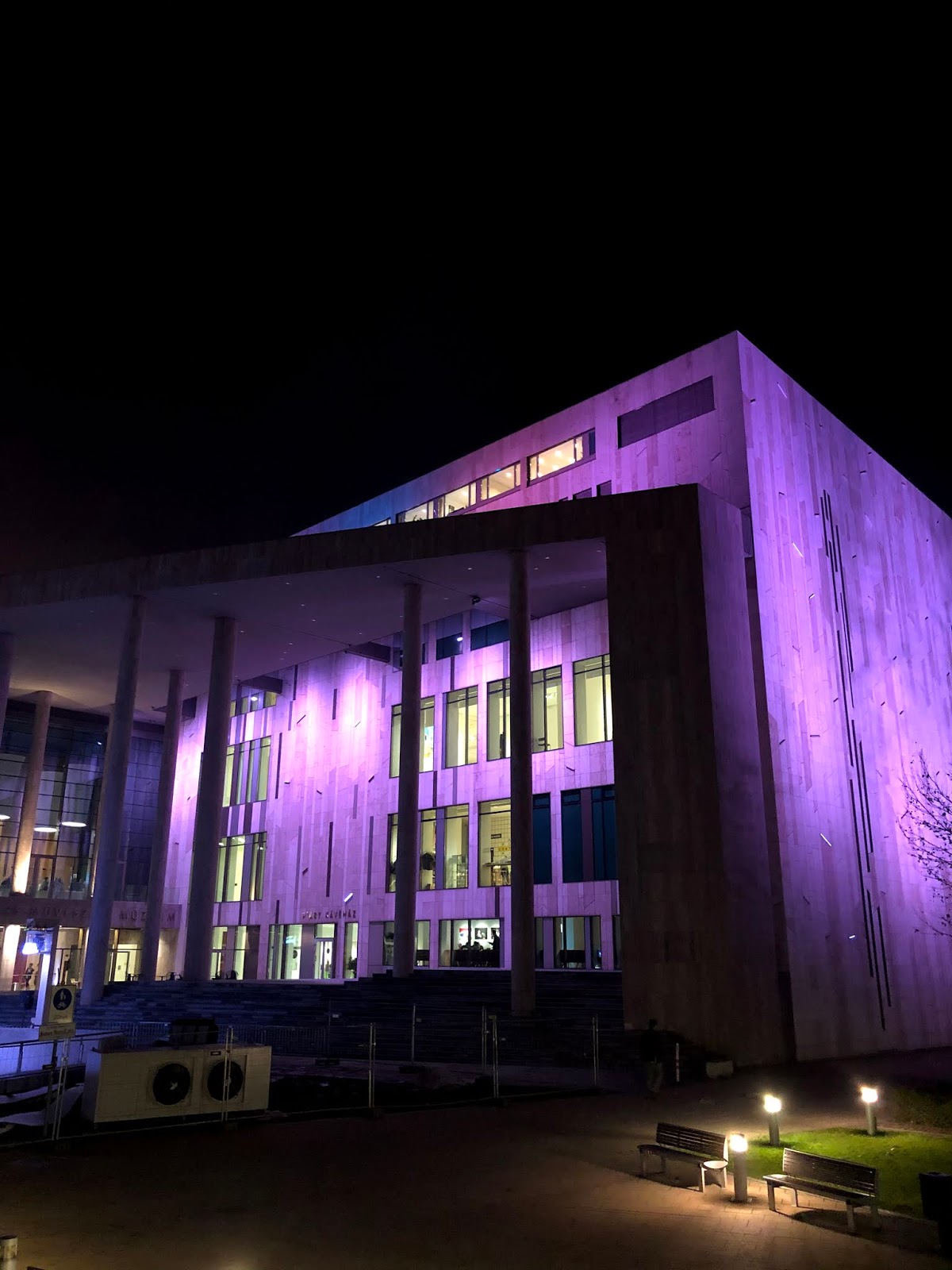 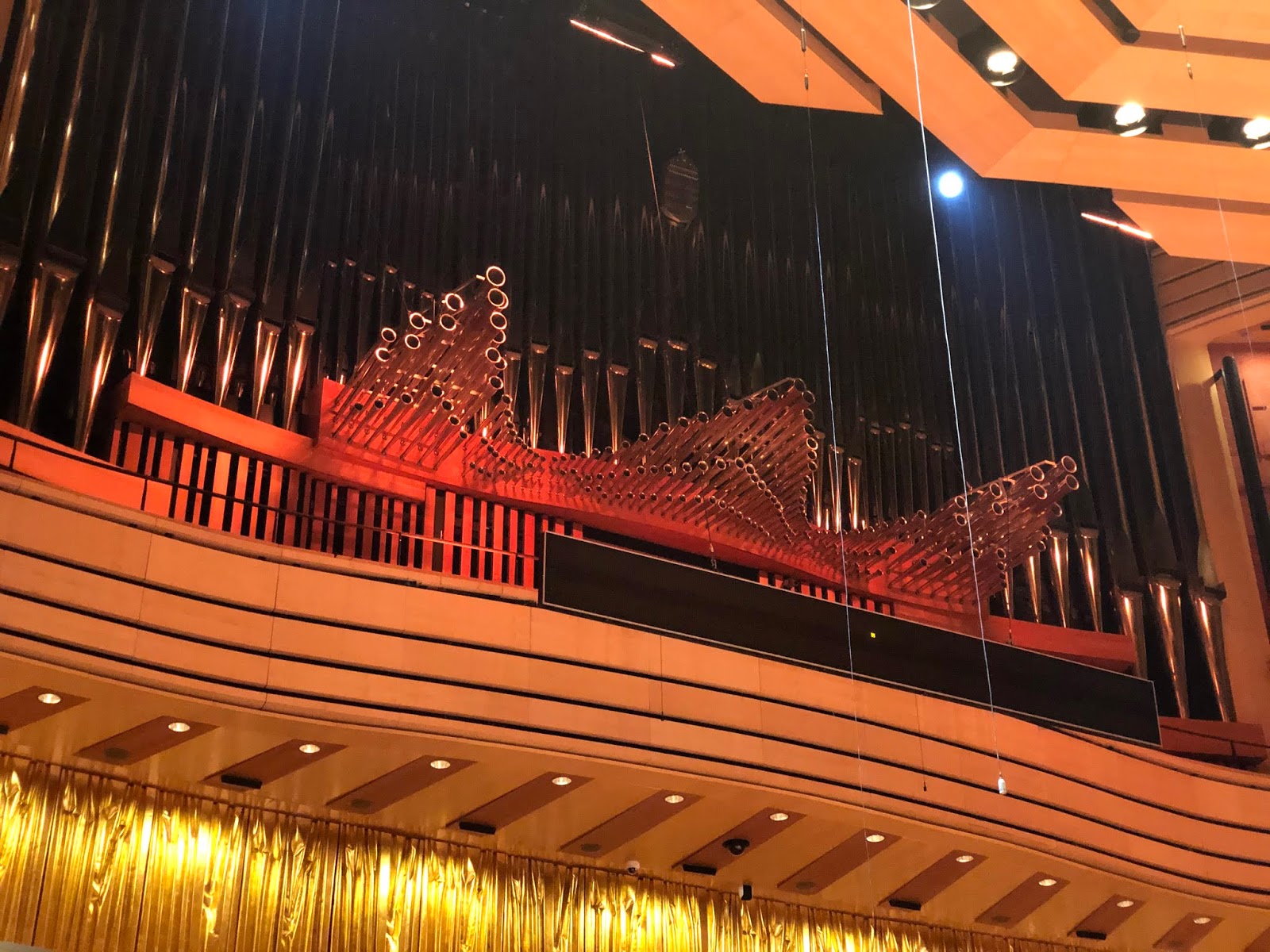 The auditorium seemed to be full and the final applause of the concert became intensely rhythmic and synchronised. Apparently this phenomenon is called ‘vastaps’ which means ‘iron applause’, from the clapping that persisted after the iron safety curtain had descended in a theatre. The applause after our performance on Thursday 19th December 2019 was insistent, rhythmic and had an accelerating tempo. At a certain point the acceleration became unsustainable, and with a remarkably uniform consensus the applause began anew with half-speed clapping. It was an impressive display of the primal rudiments of music and it was strangely moving to hear such unity in the applause. Marcus Creed and the soloists returned to the stage at least three times as the vigorous applause continued, and Susanne Regel (oboe) took a well-deserved bow for her obligato solo contributions. I was invited to do the same, both individually and with the trumpet section.

After the concert, we enjoyed winding down in a craft beer place, opposite the Mercure Hotel. Back at the hotel, courtesy of our Hungarian bassoonist, we had a small taste of a pear Pálinka, a Hungarian fruit brandy, before grabbing a few hours of sleep prior to another early start.

The trumpet section returned to Luton Airport in the UK, said happy Christmas to each other and we went our separate ways. It had been a great tour. I was exhausted, but I had to carry on for one more gig that evening, so I made it home for a few hours before heading to Northampton for my final Messiah before Christmas.
Bach, Broadcast, France, Le Concert Lorrain, Natural Trumpet, Radio Broadcast, Tour, Touring, Zugtrompete
Russell Gilmour